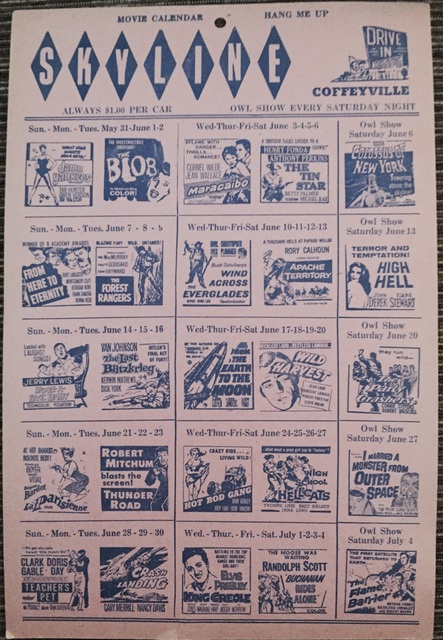 Listed in Film Daily Yearbook of 1955. Coffeyville had two drive ins; Tal’s Drive-In was a completely different theatre, but both were operated by Tal Richardson.

Found it! The approximate address is 5300 County Road 2000, Coffeyville, KS located on the SE corner of the intersection of 5300 Road and 2000 Road on the east side of the town.

All that remains on the property is the foundation of the projector booth and the very faint outline of the drive-in along with the ramps. http://tinyurl.com/nlnn5su

Here is the complete address:

A 1954 aerial shows the drive-in fully built a year before it officially opened.

The trees still have leaves that are dark (black ‘n white photo), so it could not have been taken later than mid-October of that year.

Lots of reasons why the drive-in did not go into operation until the following year, so I will not guess. But it is not all that unusual.