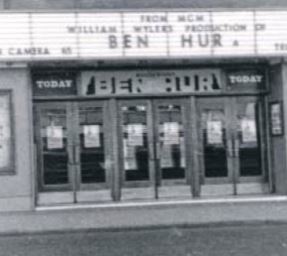 Located in Maidstone, Kent. The Central Picture Playhouse was opened on 7th February 1921 with 1,250 seats. It was designed in a Tudor Revival style by architectural firm Ruck & Smith. It was equipped with a 3Manual church type organ and had an orchestra to accompany the silent films. It also had a tea room for the convenience of its patrons.

It was reconstructed to the plans of architects C. ‘Jack’ Foster & R.J. Westaway, and re-opened with Gregory Peck in “Moby Dick” on 10th December 1956 as the Ritz Cinema (not to be confused with the towns' other Ritz Cinema which was also a Union Cinemas cinema, and had been destroyed by a fire in January 1954). Seating was provided for 1,270, with 869 in the stalls and 401 in the circle. It was re-named ABC in 1962 (not to be confused with the former Granada Theatre which was last re-named ABC). The ABC was closed on 5th October 1974 with Peter Cushing in “Legend of the 7 Golden Vampires”. It was converted into a bingo club.

It was demolished in 1980 and a Boots store was built on the site.