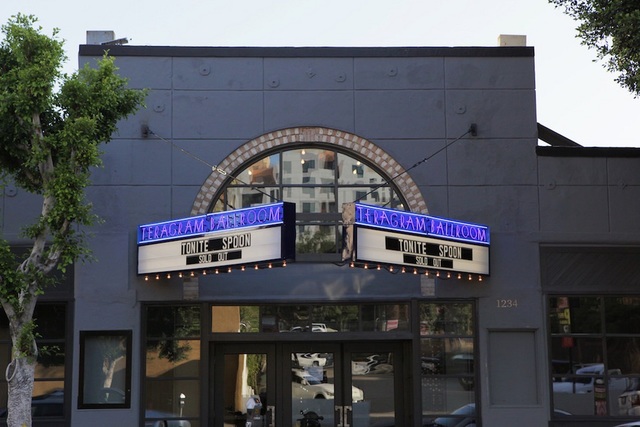 The Playhouse Theatre was one of many small independent movie theatres that were around Los Angeles. It opened in 1913 and by 1932 it was known as McKinney’s Playhouse.

By 1941 it had reverted back to the name Playhouse Theatre and was still operating in 1952. It later became a printworks and then a church followed by retail use.

On May 31, 2015, following renovations it reopened as the Teragram Ballroom, presenting live music and dancing. The capacity is for 600 persons.

A Playhouse Theatre, at 1236 W. Seventh Street, was listed among the movie houses in the 1915 L.A. City Directory.

Google Maps gets the right location for this parcel, but their Street View feature totally blows it, showing a spot east of the freeway when you try to view anything east of Hartford Avenue.

I’m still convinced that the Playhouse Theatre building has not been demolished.

It’s either the Quality Cafe building or the violin shop building.

Bing Maps provides a decent bird’s-eye view of this building, and the roof of the auditorium can be easily seen. The photo doesn’t get close enough to the facade to make the signage over the former theater’s entrance readable, though.

All of the buildings on this block are old and low-rise. There’s been a lot of rebuilding in the neighborhood in recent years, and I wouldn’t be surprised if this block got redeveloped when the real estate market picks up again. Maybe somebody from the area could get some pictures of the ex-Playhouse before it really is gone forever.

The Playhouse Theatre building is still standing and has a new roof – front facade is also in good shape although looks extensively done over. The main entrance opens into a violin shop. I don’t believe that extends to the auditorium – it would be a fairly large music store. Clearly no balcony, is a fairly low building. No hint of what is in the auditorium but there are a couple garage doors on the back right side. Maybe it’s a warehouse?

The December 14, 1912, issue of Southwest Contractor & Manufacturer said that a brick moving picture theater and garage was to be built on the south side of 7th Street between Garland and Hartford Streets. As the L.A. County Assessor’s office says that he Playhouse building was built in 1913, it must have been this project. The building was designed by the firm of Mayberry & Parker, architectural engineers, with offices in the Pacific Electric Building.

There is a page for Edward Leodore Mayberry Jr., at the Pacific Coast Architecture Database, and it has an interesting bit of information. It lists the Lobero Theatre in Santa Barbara among his works. Mayberry was the engineer on that 1924 project designed by architect George Washington Smith.

The Lobero was (and is) a live theater, but the movie theater trade publication Exhibitors Herald and Moving Picture World was so impressed by the house that it ran an illustrated article about it in the “Better Theatres” section of its issue of September 1, 1928, suggesting that the Lobero be used as a model for suburban movie theaters.

A brief biography of Mayberry’s partner, Llewellyn Adelbert Parker, can be seen on this web page, and it says that their firm (which operated from 1907 to 1918) engineered the Majestic Theatre (presumably Hamburger’s Majestic on Broadway) and the Panorama Theatre. The Panorama was the Main Street building that Adolph Ramish converted into the Adolphus Theatre, later renamed the Hippodrome.

Thanks for that link, Howard. It’s remarkable that the Playhouse building has not only survived for so many decades after the theater closed, but will now have a second life as an entertainment venue.

The vaulted auditorium ceiling as seen in the slide show must have been original to the theater, though there is a possibility that the circular reveals for indirect lighting could have been added in a later remodeling while the theater was still in operation.

Bill Counter’s page for the Playhouse has a photo from 2009, when the auditorium was being used as a church by Victory Outreach. There is also a 2014 photo taken during the conversion of the space to the Teragram Ballroom. The stage seen in both photos must have been added by the church, but the ballroom’s developer has added a traditional proscenium to it as part of the renovation. The side wall decoration is also modern.

Counter has discovered that the auditorium served as a print shop for some time after the Playhouse closed. My family was in the printing business so I know that presses are very heavy, so when the floor was leveled it must have been done with a very thick pour of concrete. The Ballroom must have kept that floor. It would have been prohibitively expensive to dig it out. But even though the ceiling is likely all that remains of the Playhouse’s original interior, it’s nice to know that the building has entered its second century still standing, and is once again providing entertainment.

Teragram is Margaret spelled backwards. I believe Margaret was the name of the owner.