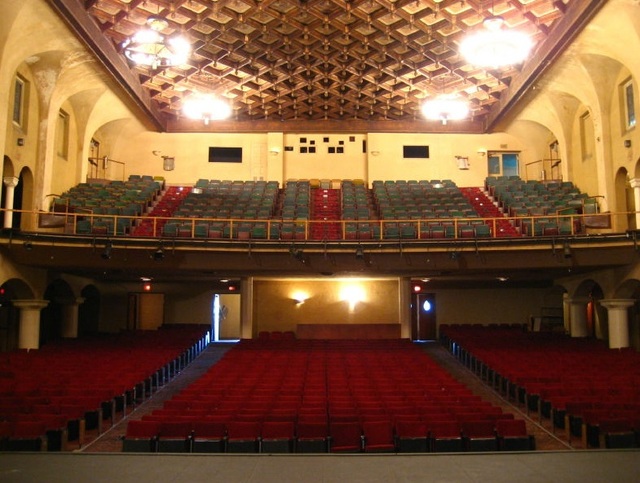 The Friday Morning Club was founded by suffragist and abolitionist Caroline Severance. In 1922, the members announced plans for brothers James & David Allison to design and build a five-story clubhouse on Figueroa Street, replacing a 1900 structure alreading in use. The club opened in April, 1924, at a cost of over $750,000. Over the doorway is carved their motto:‘In Essentials Unity - In Nonessentials Liberty - and In All Things Charity’.

The building contained offices, lounges, a library, assembly/dining room with seating for 500, an art gallery and two small clubrooms. The 1,100-seat auditorium occupies first floor. The 500-seat auditorium on the third floor was leased out as The Playroom, a live venue and vaudeville house. It is said that Clark Gable made his acting debut here in “Romeo and Juliet” in May of 1925.

In the 1940’s, the theatre became the Times Theatre, and featured movies as well as live shows.

The Friday Morning Club sold the building to Milt Larsen’s non-profit Society for the Preservation for Variety Arts, and it became the Variety Arts Center. Due to problems with the IRS, the Center closed in 1988. For a while the building was being run as a club/concert venue with performances by the likes of Siouxsie and the Banshees, The Butthole Surfers, Snoop Dogg, and Dr. Dre’s movie “Murder Was the Case”, held its premiere here on November 3, 1994.

The Anschultz Entertainment Group owned the building for a short time. David Houk of Houk Development Company purchased it in 2006 and it was used for special events. Purchased by the Robhana Group of investors in 2012, in January 2016 renovations began to convert the building into a church. The Australian based Hillsong church who have been using the Belasco Theatre four times a week in recent years have taken out a 15 year lease and will move into the Variety Arts Center in late-2016.

The building is a registered historic cultural landmark.

Floyd B. Bariscale has posted an extensive entry about this theater, with many images, here, as part of his ongoing series of pieces about Los Angeles landmarks.

Wow, that’s quite an article. Thatnks for posting it.
It’s amazing that any developer could have spent 8 million dollars just four years ago for some place so massive, only to sell it off yet again.
I hope the Time’s get’s a new lease on life soon.
That club interior is reminiscent of the famous Bergoff Restaurant in Chicago.
Maybe the club portion could be opened up as a money maker first, with hopes of generating interest in reopening the theatre portion.

Maybe the new, young Hollywood millionaires could pool their resources ala Planet Hollywood, and become heroes for restoring such a landmark theatre.

The theater is for sale on Loopnet for 12.5 million. This area by Staples Center is undergoing massive redevelopment.
http://tinyurl.com/8k6dn2

Don, are these two theatres in use now?

The last time I was in the neighborhood, the building was empty. However that was about five months ago, and something interesting could have happened in the meantime…

Note re: description at the top, it should read Times, not Tomes.

In the 1980s I saw live magic shows there, as well as performers Rudy Vallee, Buddy Ebsen, the Wiere Brothers, Bob Cummings and others. One year I attended the New Years Eve dance. Art Deco and His Orchestra were the house band. Art’s mother proudly told me of his violinist son, “He studied with Heifetz.”

1941 photo as the Times Theatre added courtesy of the AmeriCar The Beautiful Facebook page. Likely originally from one of the dead links…