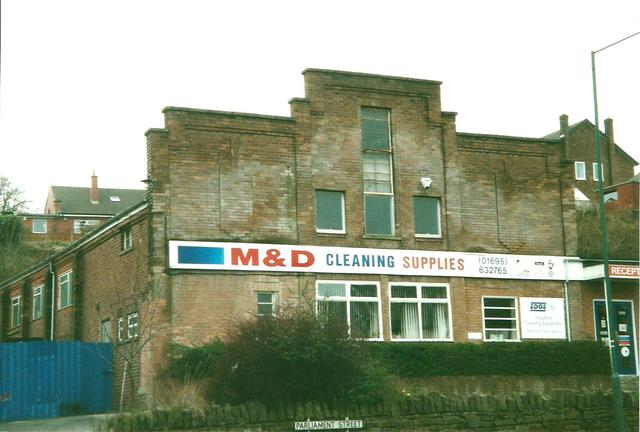 Although listed in the 1953 Kine Year Book under Wigan, Up Holland is a civil parish and village approximately 3 miles east of Skelmersdale and 4 miles west of Wigan.

Regrettably, there is little information about the village’s only cinema, the Lyric Cinema. Even its opening date is not known, though it would appear to be post-war, as it is not listed in the 1940 Kinematograph Year Book.

Just about the only certainty is that it closed on 29th June 1957 with “Charley Moon” starring Max Bygraves. So it could have been a very short-lived venture.

The building appears to have lain empty for many years. It was reported that it had been acquired by the parish council for £500, and they turned away several businesses interested in the premises.

By the time of my visit, in April 2001, it had been acquired by M&D Cleaning Supplies, which company still operates from the building today (November 2015).