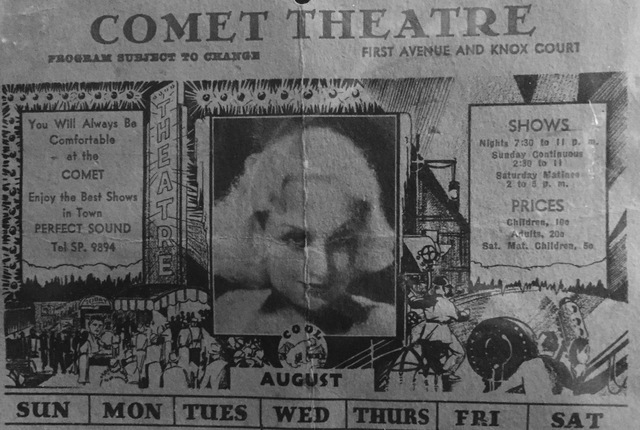 The Comet Theatre was opened prior to 1931 when it was listed with 450 seats. It seated 495 according to the Film Daily Yearbook of 1950. It was closed in 1957. In 1962 it was reopened as an art house and was briefly renamed Paris Theatre. It went over to live performances in May 1963, closing within weeks. On June 10, 1963 it was destroyed by an explosion, thought to be an arson attack.

Had one final run as the Paris Theatre for the Art Theatre Guild Circuit in 1962.

The Feb. 4, 1963 issue of Boxoffice ran a two-page article, with photos, of the renovated Paris. “Remodeling a theatre that had been closed for five years, and had thus become completely dirty and filthy, was the job tackled by several employes of the Art Theatre Guild, which operates 30 art theatres, three of which are in Denver.”

What a remarkably fast descent for the former Comet, as told over a few weeks in Boxoffice:

May 6, 1963: “The Paris Theatre, which operated under an art house policy, has been taken over by Wally Nash, who will open it with live entertainment. The first stage show will feature six comedians.”

May 20, 1963: “The Paris Theatre which had been operated as an art house and more recently with live entertainment has been closed and is for sale”

July 1, 1963: “Investigative authorities have declared the explosion which completely demolished the Paris Theatre in Denver to have been a case of arson.”