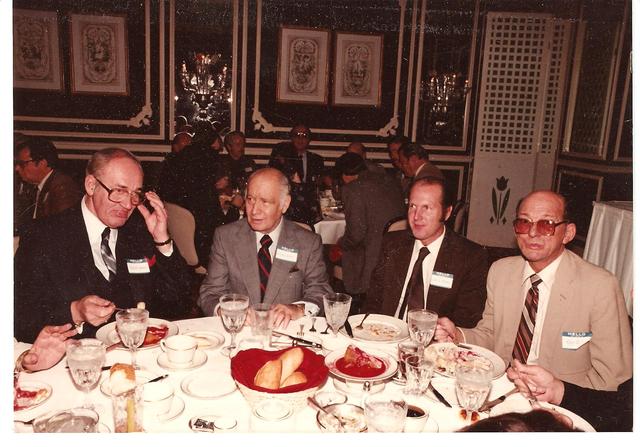 The former Hollywood Theatre was opened on December 20, 1913 as a silent movie palace in the rapidly emerging Hollywood Theater district. It was designed in a Romanesque style, by architectural firm Krempel & Erkes (John P. Krempel & Walter E. Erkes). The façade had glazed brick. The lobby was in marble tile and the auditorium was decorated with Corinthian columns and a coffered ceiling. In September 1923, a Wurlitzer organ, Opus 697 was installed.

The Hollywood Theatre was first remodeled in 1927. By June 1938 it was operated by Fox West Coast Theatres and they employed architects Claud Beelman and Clifford A. Balch to design a new Art Deco & Moderne style interior, and the neon marquee we see today was added, designed by S. Charles Lee. It was one of the first to be installed with angled side panels to catch the eyes of passing motorists.

After decades of showing movies, the seedy, dilapidated state of Hollywood Boulevard doomed the theatre and it was closed by Mann’s Theatres in 1992. It was converted in the mid-1990’s into a venue for the Guinness Book of World Records.

The marquee was always the best element of the theatre, and it has been saved and integrated into the building’s current façade.

Fox West Coast Theatres, which ran the Hollywood for many years as a second run move-over house for the Chinese Theatre down the street, used the same design when it built the Granada Theatre in Wilmington, CA.

You said it LarryD.

A HAMMER FILMS theatre,if i ever heard of one only in the super big cities.

During that time National General booked that type of films into that house. Over the years each theatre on the Hollywood Blvd. got booked with special type of film that pulled in the money.

I worked there in 1957 and 1960. Bill Quann was the day manager and Victor Bugliosi was the night manager. Kathy McRae was the cashier. It was open all night with a First run and with a B title. Celebrities came late after the Night Spots on the strip closed. There was no air-conditioning. We had to go up on the roof and open the vents to let the cool night air come in. I liked working nights rather than days. More activity on Hollywood Boulevard. Rocky changed the marquee there and a few other theaters. It was a split owner with the Fox Theater chain. I forget the assistant manager. I named him on another Cinema Treasurers blog for the same theater.

Dave James, the manager of the Hollywood Theatre during the 70’s is second from the right in the above photo. I worked a couple of matinees at the Hollywood while I was working the evening showing of Fiddler on The Roof at the Fox Wilshire. Talk about a study in opposites. Working the Hollywood at any time of the day was anything but dull.

Anyone out there remember John Stark, Donna Perrot or Sandy Binkley? John was kind of a dork, but I’ve remained good friends with Donna and Sandy over the years. Sadly, Dave James committed suicide in the eighties.

Architect Beelman spelled his first name in the English style, without an “e” on the end: Claud.

When star wars moved over to this theater two weeks after its run at the chinese 40 years ago this past thursday, it had to be renovated and retrofitted with 70mm dolby stereo while the chinese showed Sorcerer. Star Wars stayed at this theater until August 3rd, 1977, when it returned to the chinese with a lavish ceremony. What movie played in its place?

moviebuff82: “Sinbad and the Eye of the Tiger” replaced “Star Wars” at this theater on August 3rd, 1977.

Forty years ago today, the Hollywood zone booking of “Star Wars” was forced out (no pun intended) of Mann’s Chinese Theater because of a previously-scheduled booking (“Sorcerer”) and moved over to this theater, where it played temporarily for six weeks before returning to the Chinese.

I saw the trailer for sinbad. Speaking of eye of the tiger, did rocky III play here?