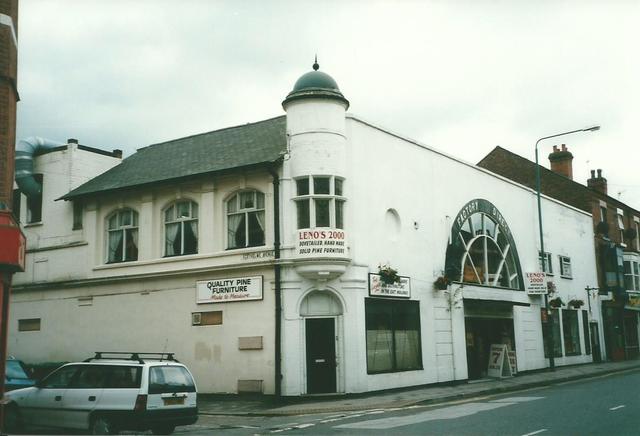 In the north Nottingham suburb of Hyson Green, at the junction of Radford Road and Scotholme Avenue. The Little John Cinema was opened 12th January 1911. It was closed on 13th March 1912. Re-opened as Leno’s Royal Picturedrome on 12th April 1912. It was closed in July 1913 and was enlarged, reopening in September 1913. Seating was provided for 1,000. At the end of 1917 it was re-named Leno’s Picturedrome. In February 1930 it was closed for a period of time to allow for a complete alteration and the the installation of a Western Electric(WE) sound system, and it was owned by Highbury Cinema Ltd. of Bulwell. The seating capacity was 961.

By the 1953 edition the seating had reduced slightly to 870, by which time it was called Leno’s Cinema. It was equipped with CinemaScope in May 1955. Leno’s Cinema was closed on 24th February 1968 with Barry Ingham in “A Challenge for Robin Hood” and “Ringo and his Golden Pistol”. It was converted into a bingo club which continued into the 1980’s. It then became a snooker hall. By 1992 it was in retail use as a Pine furniture warehouse shop

When I visited, in July 2001, the building was occupied by Leno’s 2000 furniture outlet. It has since been demolished and replaced by an apartment block.