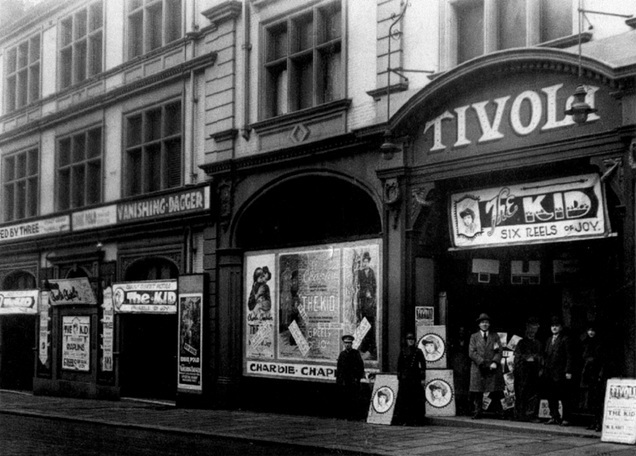 Sheffield’s first cinema opened in the Central Hall on 10th July 1905. The building had originally opened as a Mission Hall on 1st October 1899. The cinema’s proprietor was Jasper Redfern and Company Ltd. Variety acts were initially interspersed with the films. The cinema occupied the main hall, with a gallery at first floor level.

By 1912 the company was in financial difficulties. However, company secretary Norris H. Deakin found the backing necessary to improve the amenities (including increasing the size of the stage and adding an attractive proscenium arch) and increase the seating capacity from 550 to 700, and a New Central Hall Company was registered early in 1913, with Deakin as managing director. However, the tenancy soon passed to Tivoli (Sheffield) Ltd, and from 12th January 1914 the cinema was renamed Tivoli Cinema. The managing director was Edward J. Woollen, but by 1923 his health was failing and Sydney Kirkham acquired a controlling interest.

From June 1915 the booking of variety artistes ceased. In the early hours of 15th November 1927 there was a disastrous fire, and the cinema remained closed until 23rd July 1928. When it re-opened with “The Dangers of Ignorance”, it was renamed the New Tivoli Cinema, but most regulars knew it as the ‘ranch house’, due to the number of Westerns it played. By 1936 the seating capacity had been reduced to 500.

The New Tivoli Cinema closed on 12th December 1940 following ‘blitz’ fire damage. It never re-opened. The former cinema area was refurbished and adapted for offices, a restaurant and a shop.