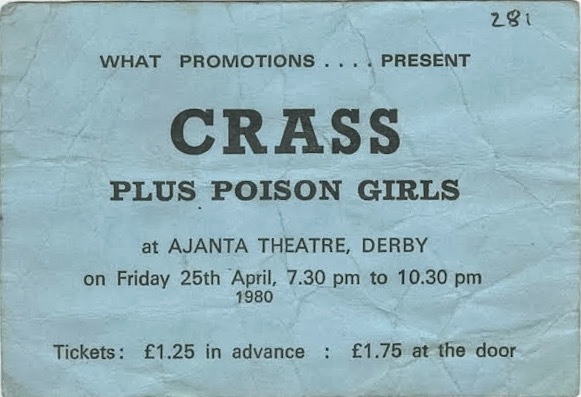 Built at the turn of the century as a Baptist Sunday School, the building was converted to a theatre and opened as the Derby Playhouse Theatre on 1st October 1952 with J.B. Priestley’s “When We Are Married”. Films were screened (on Sunday’s?) by the Derby Film Society.

In March 1956 the building was gutted in a serious fire, but was quickly rebuilt within the existing walls and reopened with very plain 1950’s decor in the auditorium, and at the same time it took over the pub next door which became the Playhouse bar and box office.

With lots of acclaimed plays and actors throughout the 1970’s the reputation of the theatre grew and when funding became available from the newly formed arts council bodies, a new theatre was planned in the city centre. The old Playhouse closed on 31st May 1975 with a triumphant production of “Tommy”, and was quickly forgotten and boarded up.

A few years later it reopened as the Ajanta Cinema to serve the local Asian population playing Bollywood films. It also had a brief period operating as a cinema club screening uncensored adult films in 1977 until May 1978.

It was also in this period it became a venue for punk and new wave bands to perform at, many legendary names played here and the venue suffered riotous gigs where seats were ripped out and thrown on stage. Bands in this period included Joy Division, Psychedelic Furs, Throbbing Gristle, The Photos and UK Subs.

By 1983 the very rundown building was once again boarded up and stood alone as the surrounding blocks of terraced houses had been demolished. A few years later it was demolished to allow the car park at the rear to be extended.

I remember being taken to Christmas pantomimes here as a child in the early 70’s, even at a young age i recall its austere interior, a cold tiled passage to the auditorium and hard seats. As a teen i came to gigs here when it was in a right state, the bar in the former pub next door was a feast of button back leatherette and flock wallpaper. I don’t know which band finished it off but it closed after one particularly riotous gig where the seats were ripped out and thrown on stage. It sat for many years in a derelict state (when i took the two colour photos (around 1983 ish) and it was no surprise it was eventually demolished for parking for the nearby city shops