The Santa Fe Theatre was one of the many neighborhood theatres that was located around the Long Beach area. It was opened on May 29, 1946 with Fred MacMurray in “Pardon My Past” & Deanna Durbin in “Because of Him”. A feature of the exterior of the building was a 110ft slender tower. Following its closure in late-1953 with Doris Day in “Calamity Jane” & Peter Lind Hayes in “The 5,000 Fingers of Doctor T”. On November 7, 1958 it was converted into a bowling alley, again designed to the plans of the original architect Hugh Gibbs. Later closed, it was demolished and family housing was built on the site.

Having lived on the Westside of Long Beach for many years during the late 50’s and sixties I have many fond memories the “Passion Pit”. I seem to remember it cost a $1.50 a carload to get in and in later years when the price was per person hiding a few friends in the trunk of the car to save beer money. I still have a post speaker that somehow became unattached during a fast exit.

Was this a drive in or an indoor theater?

I think that the poster “maxwellshammer” is confusing the Santa Fe Theatre at the corner of Santa Fe Avenue and Hill Street, with the Long Beach Drive-In, which was off of Santa Fe, just north of the 405 Freeway. The Santa Fe was a bowling alley by the time I moved to the westside in the late 1950’s. The bowling alley was torn down in the early 1980’s. When the Navy moved out, so did most of the customers.

The drive-in was torn down many years later and office buildings for the Hughes Corporation where built there. The headquarters for the Long Beach Unified School District is now in one of those buildings.

Here is a 1983 photo when the theater was a bowling alley:
http://tinyurl.com/dlkfbt

The 2100 block of Santa Fe is now apartments.

I’m seeking more information about the Santa Fe as well as the Cabart. I do know the Santa Fe opened on Wednesday May 29, 1946. Not sure about closing date. I remember hearing rumors about drugs being sold at the snack bar if you knew the right people and that led to the closure. Fairly safe to say that was probably just gossip being spread possibly in the lobbies of other neighborhood theatres like the Towne, Crest, Atlantic, Lakewood and Cabart. Anyone remember hearing about this?

Another grand opening with picture 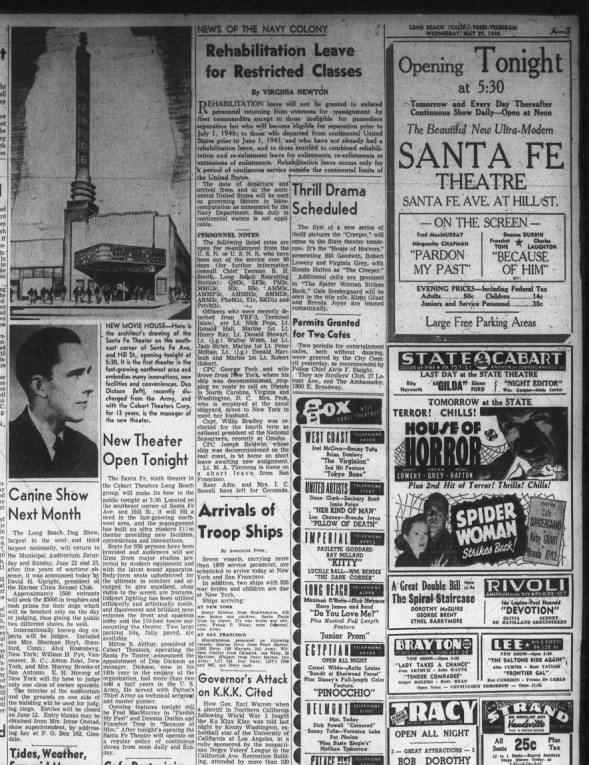 Cabart Theatres announced this $125,000 project in 1945 as the War was ending. The theater was designed to hold 1,000 patrons and its interesting feature was to allow for the usage of television which Cabart felt would be important post-War. Its streamline moderne design by architect Hugh Gibbs featured a 110 foot sign tower. Starting out well, the theatre quickly struggled to retain its audience in the correctly-predicted world of television. The theatre had launched May 29, 1946 with Fred MacMurray in “Pardon My Past” & Deanna Durbin in “Because of Him.” But just 7.5 years later, it ended operations with Doris Day in “Calamity Jane” and Peter Lind Hayes in “5000 Fingers of Dr. T.”

Hugh Gibbs was brought back to the project to redesign the facility as a bowling venue. It launched as the Santa Fe Bowl on November 7, 1958. It closed and was demolished in favor of multi-family residences.

Thanks dallasmovietheaters for your April 19, 2021 post about the Santa Fe Theatre. Great information and so little in the way of information about this theatre as well as the rarity of photos.