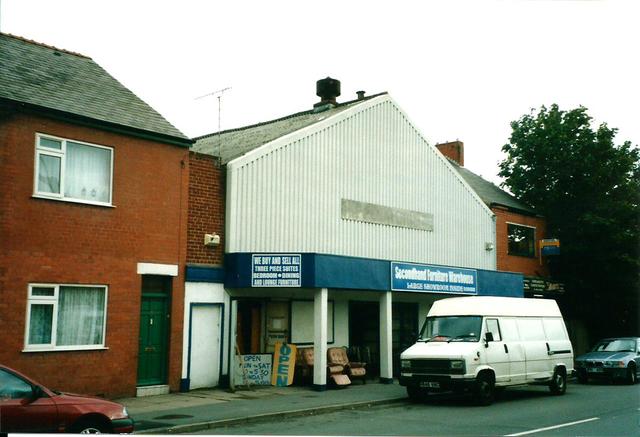 In the North Wales county of Flintshire, the Hippodrome Cinema was opened around 1910 by Arthur Correlli. At the end of World War I, around 1919, it was acquired by Mr A. Lee, of Sheffield, and operated with one show each evening, Monday to Friday, with two shows on Saturday.

By the 1930’s, British Acoustic(BA) sound had been installed, and the owner was Enterprise Cinema Company, formed by local businessmen T. Williams, A. Davies, G. Davies and Mr Summerton, who ran an adjoining shop.

In 1935 the cinema was modernised, with an Art Deco style brick front being added.

The screen was listed as being 16ft wide and 12ft high, with the proscenium being 27ft wide. Imperial Sound replaced the earlier installation.

The Hippodrome Cinema closed in May 1962. By the time of my visit, in September 2002, steel cladding covered the frontage, though the rear exterior wall showed up the original tin plate construction. It was in use as Secondhand Furniture Warehouse, which continues to date (December 2015).