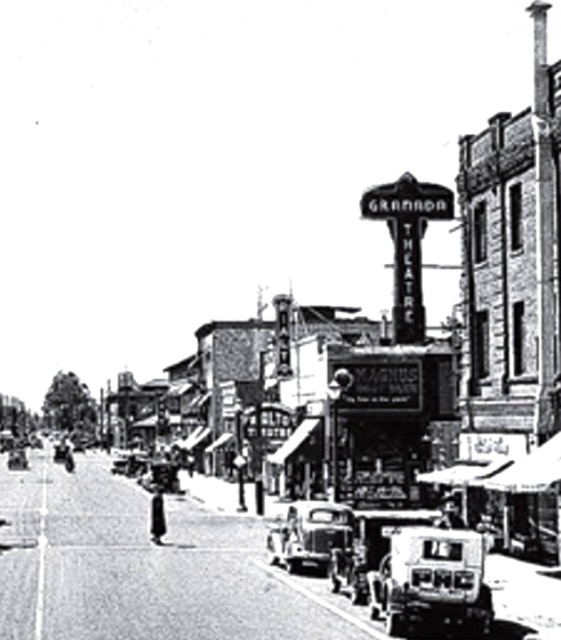 The Rialto Theatre opened on December 11, 1917. In 1945 it went over to screening Spanish language films. A fire in the projection booth closed the theatre on September 4, 1950. The former Rialto Theatre is now used for retail.

The Rialto Theatre building is still standing and is now a 99cent store. The Rialto was owned by the Lemmucchi family who also owned the Granada Theatre across the street. The theatre used Powers model B Projectors.

Hello, any photos, old or recent, of the building?

The only photo I’ve found showing the Rialto is this ca.1940s shot of Baker Street, with the theatre at some distance in the center. A vertical sign for the Granada Theatre (presumably around the corner) can be seen at right.

The correct address for the old Rialto Theater is 958 Baker Street. I updated the photo to the correct building. After the theater closed it was the home of Pete Jones Music for decades.

This photo of Baker Street circa 1930 includes the Rialto Theatre. Click on the image to enlarge, then follow instructions to zoom in. The Rialto is on the far corner of the intersection on the right.

The Rialto launched December 11, 1917. In 1945, under A. Blanco, the Rialto converted to Spanish language film. A projection booth fire during shows on September 4, 1950 may have been the final night of operation. The theater was offered for sale including 410 seats and the concession stand in 1951.