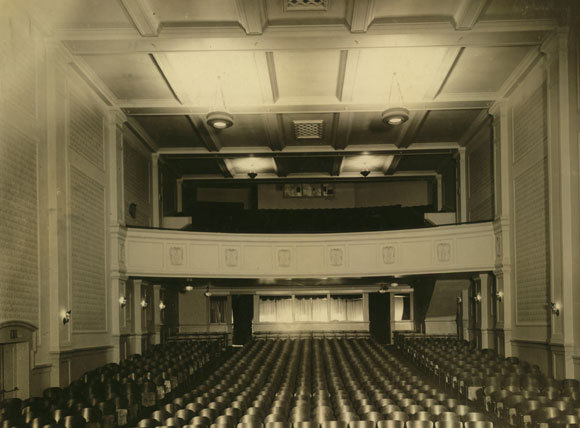 The former Lorin is today (and has been for a number of years) known as Phillips Temple Church. It is still an impressive sight (at least in terms of its facade).

The Lorin was built in 1914 by H.L. Beach and W.F. Krahn. The original architect was Albert W. Cornelius. Its interior was remodeled in 1920 by James Plachek. It closed as a theater in 1954.

Would gsmurph be willing to email me at I have questions about Berkeley CA movie houses.

The Lorin Theatre was completely rebuilt in 1916. That year’s September 23 issue of The Moving Picture World said that the Lorin had opened on Saturday, June 24. The old theater had been closed on March 5 and demolished.

The 1920 rebuilding of the Lorin designed by James Plachek took even longer than the 1916 rebuilding, so it must have been quite extensive. The March 1, 1921, issue of The Film Daily said that the Lorin Theatre had reopened on January 27 after having been closed for four months for rebuilding.

The Lorin Theatre was remodeled again in 1931. This item is from the August 29 issue of Building and Engineering News:

According to building permits in the BAHA archives, the first Lorin Theater at 3330 Adeline Street was built for William F. Krahn by contractor Abel Roust in 1909. The following year (1910), Krahn took out a building permit for new construction at 3332 Adeline. The contractor again was Abel Roust, but this time he was also listed as designer.

Roust was also the contractor for a major remodel (with a permit for new construction) undertaken by Beach & Krahn and designed by Hiram K. Lovell in 1914. It’s possible that this construction was delayed. A July 1916 article in The Moving Picture World mentions that the theatre closed “last March,” which could be March 1915 or March 1916, although the latter is more plausible. http://bit.ly/14iEUmF

The next major remodel took place in 1920, with James Plachek (not mentioned in the permit) as architect and Charles D. Vezey as contractor. Then came the 1931 remodel with Alfred J. Hopper as contractor, followed by a 1935 remodel by Willis F. Lynn.

Three building permits were taken out in the 1940s, after the theater was acquired by Golden State Theaters, but they appear to have been of a service nature (i.e., roofing, etc.).

There was no earlier theater across the street. There was one on the same block (3324 Adeline) that was owned by Daniel Knapp and lasted only a brief time. It was listed in the city directory only in 1909 and was probably located in a storefront. As soon as it closed, William Krahn built his new cinema.

Albert W. Cornelius had nothing to do with this theater.