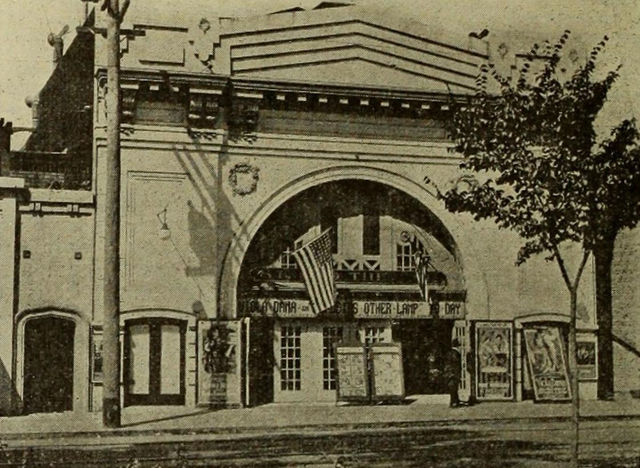 By 2009 it was operated by the independent Rialto Cinemas chain.

More accurate information can hardly be considered bad news for this web site. However, it might be bad news for the Berkeley Historical Plaque Project, which names Cornelius as the architect. Plaques, unlike words on a web page, are costly to replace. Unfortunately, the BHPP page doesn’t give a source for its claim.

I’m not familiar with the form of Berkeley’s building permits from this period, so I do have a couple of questions. A number of east bay buildings are attributed to Dufour as architect, but he was also a builder. Was his company listed on this theater project’s permit as builder? Is the permit the actual form filled out by the person applying for it, or is it an abstract prepared by a clerk in the city office?

I hate to be the bearer of bad news, but the Strand was not designed by Albert W. Cornelius. The building permit pulled on 20 June 1914 listed William Dufour as the architect, although Dufour was a realtor and sometime contractor. He probably farmed out the design, although most likely not to a well-known architect like Cornelius.

Nor was Alexander Aimwell Cantin the sole remodeling architect. The 1946 alteration permit lists his son, A. Mackenzie Cantin, as well as the father, as architect.

Joe Vogel, I found no way to edit my previous comment, so I had no choice but to delete it and start over.

In answer to your questions, the Berkeley Historical Plaque Project usually obtains its information from the landmark application submitted to the Landmarks Preservation Commission when a building is nominated. As it happens, many of these landmark applications were written decades ago, when research materials were not as readily available as they are now, and therefore contain basic errors. The Strand Theater is the fifth such case I discovered in the course of my research. I’ve initiated a discussion with the City to develop a procedure for correcting such errors.

The building permits we have at the Berkeley Architectural Heritage Association (BAHA) are scans of microfilms that the City of Berkeley made many years ago from the actual paper permits. We salvaged the microfilms when the City disposed of them, and they’re an invaluable resource.

Permit #3865, issued on 20 June 1914, lists William Dufour as the designer of the Strand Theater and D.M Etter as the builder. Both shared the same business address, which happened to be Dufour’s real estate office at 2326 Santa Clara Avenue, Alameda.

I neglected to say that D.M. Etter filled out the permit application and signed it.

chronicler: Thanks for the response and additional information. The mis-attribution of some of Dufour’s work to Cornelius has me wondering if the Rialto Theatre (first Alameda Theatre) in Alameda might also be mis-attributed. Cinema Treasures lists Cornelius as the architect of the Rialto, but the facade bears a strong resemblance to the Elmwood’s, and I can easily picture them being the work of the same designer.

There is a scan of an architect’s sketch of the Alameda on the Rialto’s photo page, but it has no name on it, nor is the source of the photo given, though it is probably from either a theater trade journal or one of the architectural journals of the period. I’ll see if I can find it on the Internet.

Joe Vogel, the Alameda Theater was designed by George E. King, according to the Oakland Tribune of 21 July 1912. I uploaded an image of the article to the Rialto Theater page.

I checked George King in Berkeley building permits and city directories. He was actually George F. King and designed quite a number of buildings—both residential and commercial—in Berkeley.

I’ve come across a reference to another remodeling job at the Strand Theatre, this from the March 24, 1924 issue of Moving Picture World:

“Plans are being prepared by Architect Mark T. Jorgensen of San Francisco for extensive remodeling work in the Strand Theatre, Berkeley, Cal., owned and operated by the Beach-Krahn Amusement Co.”

The Elmwood temporarily closed in March of 2020 due to the COVID-19 pandemic. Following 13 months of popcorn sales on weekends and virtual screenings, the theatre reopened with films on May 11, 2021.