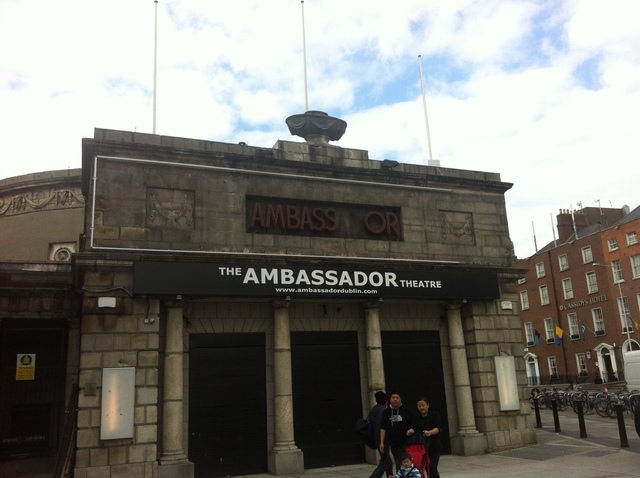 In Dublin, the building that came to be the Ambassador Cinema was constructed as part of the Rotunda Hospital, in 1764, as an assembly hall and social rooms on what is now called Parnell Street. It was designed by architect John Ensor.

From 1897 onwards, the venue was given the name Round Room and hosted a number of “moving picture” screenings, which were a great novelty at the time. From about 1908 onwards, it was used more regularly to show film presentations and in 1910 it became a full-time cinema, with 736 seats, a basic layout at the time.

Again known as the Rotunda Cinema (its nickname being the ‘Roto’ or the ‘Roxy’), the cinema-going public thronged to the venue. Over the years, the cinema changed hands until the 1940’s when it was run by Capitol and Allied Theatres Ltd.

In the 1950’s, the cinema was redesigned, increasing the capacity to 1,200. Added to the main hall was a balcony (containing 500 seats) with private boxes. A new entrance area was also constructed. The cinema was re-opened on 23rd September 1954 as the Ambassador Cinema with Danny Kaye in “Knock on Wood”. It became a gala event venue, holding screenings of many films for the first time. Of note was the screening of “The Blue Max” in 1966, which was shot in Ireland. For the screening, a World War I plane adorned the roof of the cinema above the entrance.

In 1977, the cinema was forced to close briefly, but it re-opened that summer under new ownership. The Green Group ran the cinema until 1988, the cinema mainly played children’s films such as “The Care Bears Movie” and its sequels. In 1988, with single-screen cinemas on the wane, it closed.

However, in 1994 it was given a new lease of life when it reopened under the ownership of Ward Anderson. Notable screenings included “Titanic”, however, attendances were poor, most notably when a reissue of the 1935 film “The Informer” was screened to as few as two people per show. On 27th September 1999, after 45 years, the cinema closed.

However, this was not the end of the venue. Entertainment promoters MCD Productions leased the building and for a number of years, until 2008, ran The Ambassador as a live music venue. The Ambassador now hosts a variety of events including exhibitions, one-off concerts and corporate events.

Was a terrible cinema. Poor seating and really bad sound.

The exterior of the theater is featured in the 1970 Gene Wilder movie, “Quackier Fortune Has a Cousin in the Bronx.” The Ambassador looks mighty spiffy—from outside at least.