The Villa Theater is best known for its elegant neon-laden façade and sign, as well as its 93-foot curved screen, the largest in the state of Utah.

Opened on December 23, 1949 with Tyrone Power in “Prince of Foxes”. The Villa Theatre was later used as the home of Cinemiracle and Cinerama in Salt Lake City, with its three Cinerama booths still remaining in place. In fact, the theatres' original proscenium, stage, and screen are still intact, and hidden behind the large, curved screen.

The Villa Theatre was last operated by Carmike Cinemas, which renovated the old movie house in 1996.

Due to Carmike’s bankruptcy reorganization, the Villa Theatre was closed in February 2003. It has been converted since then into a rug showroom.

Thanks Grant for the great photos of The Villa. I got to see this Cinerama/Toddd-AO house many years ago when we had a THS conclave put on by Van Summerill from Odgen Ut. To see the wonderfull curved screen was the hi lite of the tour week. I will be ordering a few of the DVD’S ‘Preserve Me A Seat’ this week. And thanks to Mr Adib who saved the building from the wrecking ball; while not the Roadshow 70mm house it was at least it still stands. Someday maybe the rugs can be sold in a nearby building and big scrren movies can be shown again for the people of Salt Lake. Not first run; that killed it. Bring back as many restored 70mm prints and some old Cinerama films for a new generation to enjoy. Turn it into a Curved Screen Museum and bring in the visiting tourists that come to see the Mormon Temple.

Here is an undated photo of the marquee:
http://tinyurl.com/n4zqdz

No, it was on a site called pinballrebel.com. I guess they posted the photo from your source.

What a piece of irony that the above photo shows a hearse headed toward our deceased theatre. Makes the demise of the Villa that much sadder.

I saw Superman with Christopher Reeve for the 1st time here. It was a family movie night. It’s a super memory I have. Also my wife and I saw L.A. Confidential here.

I think this might be the cinema and it’s marquee seen briefly in the movie “Drive me crazy”. 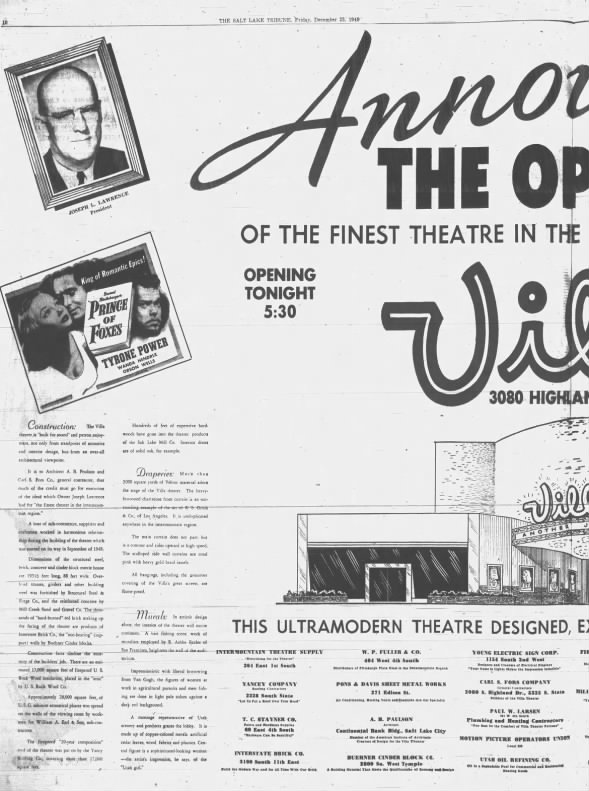 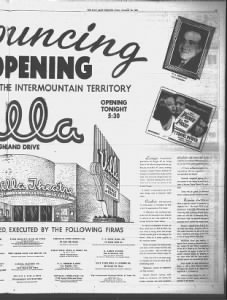 For the record, the Villa opened December 23, 1949. Tyrone Power Opening ad in photo section; played also at the Uptown Theatre.