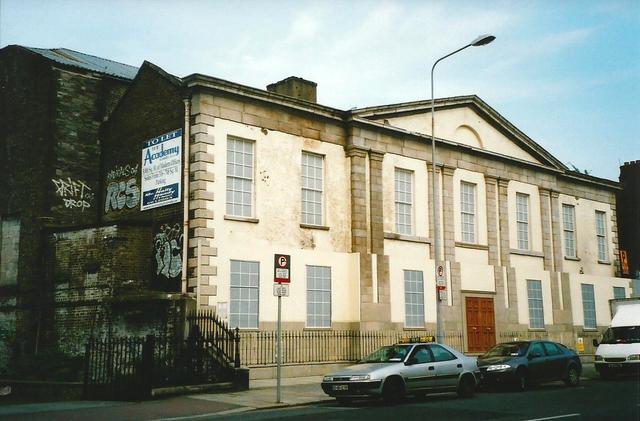 Located in the south of the city centre. Originally built in 1824 as the headquarters of the Dublin Gas Company. In 1842 it was converted into the 800-seat Ancient Concert Rooms which hosted concerts and plays. It was equipped with a Telford organ. In the early-1900’s it began to screen films.

On 13th May 1920 it became the Palace Theatre and seated 600 after alterations had been carried out. It operated as a cinema, and in December 1950 it was re-named Forum Cinema. It was closed in 1955 to allow for an extensive remodelling, which included adding a balcony and equipment for CinemaScope.

It re-opened as the Embassy Cinema in April 1956. It was sold to a new operator in 1964 and was altered to the plans of architect William O'Dwyer who removed the balcony and installed stadium seating. It re-opened as the Academy Cinema on 13th March 1965 with Peter Sellers in “Dr. Strangelove” and “The 400 Blows” directed by Francois Truffaut. It continued as an art house cinema until it closed in January 1977.

It re-opened under new ownership in August 1977 and played mainstream films until it closed as a full time cinema in July 1981. The cinema was used occasionally until the early 1990’s.

It lay empty for a number of years, becoming derelict. It was damaged by fire in 1994 and part of the roof collapsed in 2000. It was restored and converted into office space which opened in 2006.