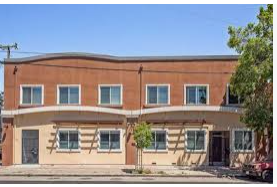 It was all but destroyed by a fire on September 27, 2004. The remains still stand in 2009 and have been repurposed for housing.

The New Peralta Theater was built in 1915 for Wallace Clark, a real estate magnate; the architect was Allen J. Yerrick. It was a Mission Revival-style theater that operated until 1953; soon afterwards it was converted into the Mt. Zion Spiritual Temple, a very prominent Black church (particularly in the 1960’s and 1970’s)founded by “King” Louis Narcisse. It remains a church today, though apparently not Mt. Zion.

A sign on the New Peralta reads WEST COAST KINGDOM—-MT. ZION SPIRITUAL TEMPLE—-apparently the church is, contrary to speculations in my initial post, still known as Mt. Zion.

Some terrible news to report—-the former New Peralta, more recently Mt. Zion Spiritual Temple—-was severely damaged by a fire this past September 27. Though the church intends to rebuild, the building’s future is very much in doubt.

This was taken a few years ago. The aerial view of the roof shows severe damage.
http://tinyurl.com/yghpfea

Went by there recently on the bus and repair/renovation work seemed to be occurring (FINALLY!). Not sure if it’ll be a church again though.

The theatre and the adjacent building were reimagined as the 6 unit Peralta Theatre Lofts. In the photo I’ve uploaded, Unit F, on the left is the former theatre and boasts 12 foot ceilings among other amenities.