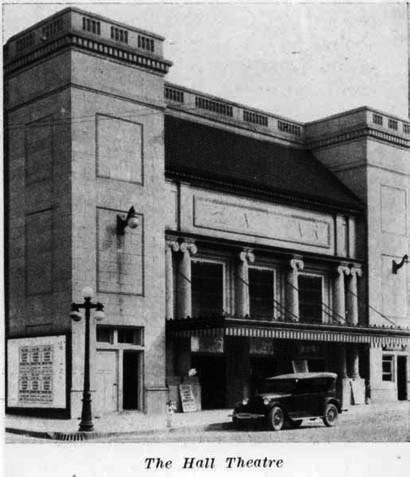 The Hall Theatre opened on August 28, 1916 as a mixed vaudeville house and movies. It was a family operation until the Commonwealth Theatre chain acquired it in 1955. By 1961 the Hall Theatre was classified as an “art movie” theatre, and was operated in the winter and closed in the summer.

The Hall Theatre was purchased by Garry Lewis in 1987 with the intention of turning it into a conference center. This never happened and it was rehabed in the early-1990’s and a St. Louis Bread Company (Restaurant) occupies the building today. There are no signs today that this building ever was a theatre except the name ‘Hall’ carved in the stone of the exterior of the building.

There is a photo of the Hall on this page:
http://www.discoverthedistrict.com/strollway.html

The Hall Theatre actually opened in 1916. My grandfather, who was a student at the University of Missouri in 1917, resided in the apartment house located behind the Hall Theatre. He remembered being unable to study because of the music coming from the vaudeville shows. By the way, the apartment building where he lived is still located behind the theatre.The Hall Theatre was built by Moberly resident Thomas Calvin Hall. A large painting of Mr. Hall used to be located on the landing of the north balcony stairway in the theatre. Mr. Hall also built the Varsity Theatre in Columbia, which later became the Film Arts Theatre, and is now the home of The Blue Note. The Hall Theatre did not become an art house per se. In 1966, not 1961, the theatre became the site of a series called “The Film Arts,” which showcased foreign films on an irregular basis. The series was so popular it led to the opening of the aforementioned “Film Arts Theatre by Commonwealth. The Hall remained open during the summer months in the early 1960s. It was the site of several first-run films at that time. It began showing double features in the mid to late 1960s and during this time is when it closed in the summer. It would reopen when the college students returned in the fall.

In my opinion the Hall was one of the three most attractive theatres, as far as decor, in Columbia. (The other two being the Missouri and the Film Arts) While perhaps not quite as opulent as the Missouri, the Hall’s stained glass and balcony were delightful and the well worn stage had charm. This was the only theatre (outside of drive-ins) I can remember that showed full length double features. It was devastating to return to the Columbia area to find it had been gutted and turned into a cafe.

There was another Hall Theatre, in Cassville, Missouri, built in 1945, and also designed by Robert Boller. The owners were a Mr. and Mrs. Glen Hall, according to an item in the December 15, 1951, issue of Boxoffice Magazine. The article was mainly about a new drive-in to be built by the Halls (and again designed by Boller) on a site south of Cassville. Does anybody know anything about these theaters in Cassville? Cinema Treasures currently has nothing listed for that town.

Here is an October 1916 newspaper ad from the Library of Congress:
http://tinyurl.com/y85m2x3

Here are multiple pages of articles about the Hall Theatre from the The August 27, 1916, issue of The Daily Missourian. The house was scheduled to open the following night, August 28.