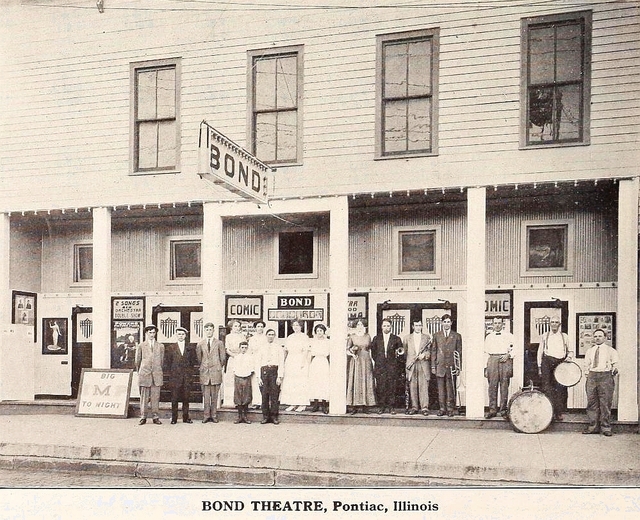 The Bond Theatre was a very simple nickelodeon style theatre, which featured a live orchestra. Architecturally, its facade featured a simple wooden upper story, and a corrugated metal exterior ticket lobby, fronted by wooden pillars. Stud lighting outlined the entrance. The Bond Theatre was opened around 1911 and closed in 1932.

The Bond Theatre is not listed in the 1914-1915 American Motion Picture Yearbook, nor is any theater listed at 303 W. Madison. The address 311 W. Madison is listed twice, though, once as the Alcazar Theatre and once as the Photoplay Theatre. The absence of the Bond could have been simply an oversight.

A letter from F. M. Bond of the Bond Theatre appears in an issue of the IMP film company’s publication, The Implet, published in January, 1912. The Bond Theatre and its owner F. M. Bond are mentioned in the June 3, 1916 Moving Picture World, and in the July 2, 1921 Exhibitors Herald. By 1923, the Bond Theatre was owned by Hal Opperman, who also owned the Crescent Theatre at that time, according to the July 14 MPW.