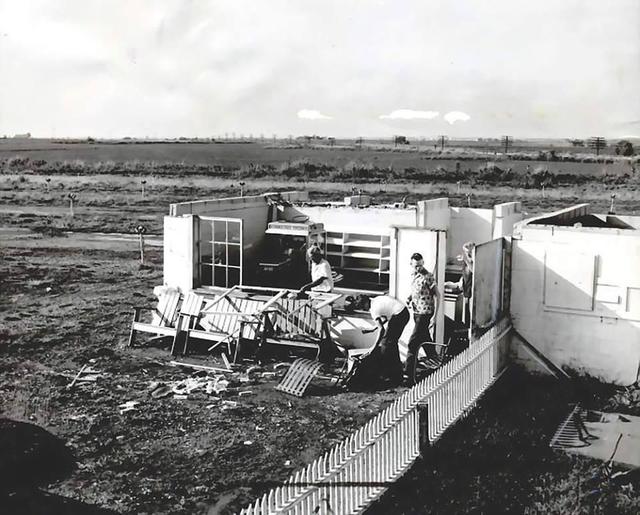 Located in Edmond to the north of Oklahoma City. The Sundown Drive-In was opened on July 3, 1951 with Barbara Hale in “Lorna Doone” and was operated by M.S. Harris. The screen was blown down by tornado in 1955. It was rebuilt and the drive-in continued until closing in 1965.

I have a photo of the snack bar.

The Motion Picture Almanac’s first reference to any drive-in in Edmund was the Sundown in its 1953-54 edition. It carried the same info through the 1965 edition: capacity 300, owner J. & J. Hull. For the 1966 edition, the Sundown fell off the list.

Thanks to some assistance by Flickr user ozoner68, I finally found the Sundown. The outline of its ramps is very faint in the 1964 aerial photo, and I don’t see the screen, but the address was clearly modern day equivalent of 1901 S Broadway, where the Home Depot is now.

Boxoffice, Aug. 4, 1951: “EDMOND, OKLA. – Grand opening of the Sundown Drive-In was held in July on Highways 66 and 77 just south of Edmond. Jack and Jimmie Hull are the owner-managers. "Lorna Doone” was the opener at the Sundown ozoner. Family programs will be stressed, the Hulls announced. In-car speakers are used and parking us easily accessible from the highways. Restrooms have germicidal lamps and the usual is available at the concession stand. A marquee board and playground will be completed later."

Lately I’ve been digging into the newspaper records for the Sundown. Jack and Jimmie Hull opened it on July 3, 1951. By September 1952, M. A. Harris was running the drive-in.

On Aug. 28, 1955, the screen suffered “extensive storm damage” and workers were hurriedly making repairs. Just a few weeks later, on Sept. 29, “hurricane-force winds” finished the job, destroying the screen and the concession stand.

And that’s it. I can’t find any evidence of the Sundown ever reopening except for the Motion Picture Almanac, which has been known to overlook closed drive-ins, and a similar item in a Film Daily Year Book list. Does anyone else here have a solid reference proving that the Sundown rebuilt?