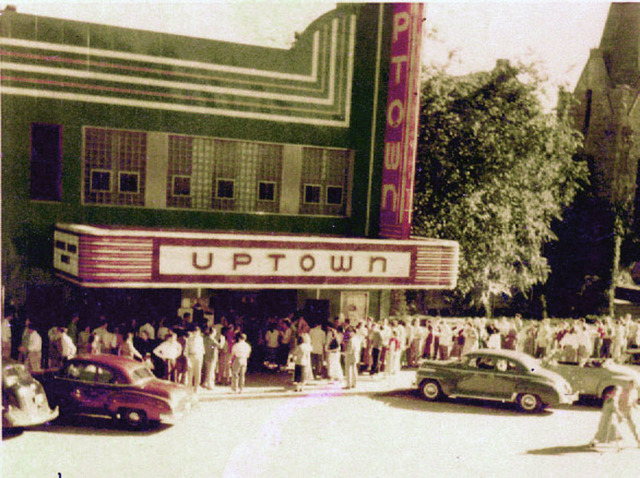 The Uptown Theatre closed on the same day as the opening of Commonwealth’s Columbia Mall 4 Theatres in 1986.

I worked at the Uptown Theatre from 1969-1971. It had 505 seats at that time. During the early 1960s, the Uptown was the site for many of the blockbuster, or “roadshow” films, mainly because of its screen’s ratio, which was perfect for the new Panavision process. Films such as “Spartacus,” “The Longest Day,” “How The West Was Won,” “It’s a Mad, Mad, Mad, Mad World,” “Cleopatra,” “The Alamo” and “Exodus” all had their Columbia debut there. It was unique theatre in Columbia due to the fact that it was the only downtown theatre without a balcony and was designed solely for movies, whereas the other downtown theatres, the Hall, Missouri and Varsity/Film Arts, respectively, started as vaudeville houses. The Uptown’s auditorium was long and narrow and every seat had a good view of the screen. The theatre had two lobbies, the main lobby upstairs and a smaller one in a downstairs area where the restrooms were. In 1970 the lower lobby and restrooms were completely renovated. As the workman tore away the north wall of the lobby, they discovered the foundation remnants of an old blacksmith’s forge, which had once occupied the theatre’s location.

There is a video game store at this address now:
http://tinyurl.com/tkhrj

Looking at Street View, the entire facade is gone. Just a simple concrete face now, with some windows in the upper floor. Wonder if those were just covered up when the porcelain facade was installed?

My father, Rex P. Barrett, built and operated the Uptown Theatre. He negotiated with the owners of Commonweath Amusement about joining the chain. Rex had completed the PhD in Economics at the University of Missouri in 1934 but decided he could make more money in the theatre business. Rex was no stranger to the movie business as his father operated movie theatres as early as 1915. While attending school, Rex worked as the assistant manager of the Missouri Theatre for the owners.

Rex’s deal with Commonwealth gave him a one-fourth ownership and he also retained the profits from the concession stand, which my grandparents operated as a separate entity from the theatre. In return Commonwealth helped with the remodel job and Rex no longer had to travel to Kansas City and bid for movies since Commonwealth did it for him and took three quarters of the net profit from ticket sales.

Here is a black-and-white night view, ca. 1935, of the Uptown’s marquee and vertical sign, from the Jane Froman papers.

A long article about Columbia’s movie theaters published in Columbia Business Times (currently online here) has a few lines about the Uptown. It says that the house opened in 1907 as the Bijo Dream, and operated for twenty years under that and three subsequent names: Broadway Odeon, Cozy and Uptown. From 1927 until 1935, the building was used for retail business, and then was reopened as the Uptown Theatre.

I’m not sure if “Bijo” is a mistake or not, as the text uses the name in two different locations, but it’s possible that it should read Bijou Dream, which was a popular name for theaters during the nickelodeon era.

I’ve added a color photo to CinemaTreasures of the Uptown taken about 1944 showing a huge crowd. I can’t tell what the movie was at the time and I’m only guessing at the date by looking at the cars. I also added a bw photo of the Boone Theatre from just after WWII.

To clarify my earlier posting: My father, Rex P. Barrett ran the Cozy theatre shortly after arriving in Columbia in 1921 after purchasing the old Odeon. Dad had been in the movie theatre business with his father Frank Barrett in Granby, Missouri during high school and after WWI. The movie theatre in Granby was named the Cozy.

After obtaining his AB degree in 1928, Dad sold the Cozy in Columbia to his competition and bought a movie house in Bloomington, Indiana. But he soon returned to Columbia and was retained to supervise the construction, equipping and furnishing of the new Missouri Theatre and to manage the operation. In 1935 after finishing his PhD in Economics he resigned from the Missouri Theatre and remodeled the Cozy into the Uptown and joined the new theatre chain Commonwealth Amusement Co.

From the October 1, 1921 issue of Exhibitors Herald: “COLUMBIA. MO. — Rex Barrett of Pierce City has purchased the Odeon theatre here and renamed it the Cozy.”

There was another remodeling of the Uptown in 1939, according to this item from the January 7 issue of Motion Picture Herald:

“The Commonwealth Amusement Company of Columbia, Mo., headed by Mayor Rex Barrett, recently awarded a contract to the Fleet Building and Repair Company of Kansas City, Mo., for the extensive remodeling of its theatre building in Columbia.”

The 1935 rebuild of the long-closed Cozy involved a considerable enlargement of the theater. The Cozy was listed in FDY’s of the 1920s with 300 seats, while the Uptown was listed in the 1930s with 700. The 1939 project must not have included any further enlargement, as the capacity listed in the early 1940s was still 700.

Photos of four of manager Rex Barrett’s “art fronts” for the Cozy Theatre are featured in this article from Universal Weekly of November 17, 1923.