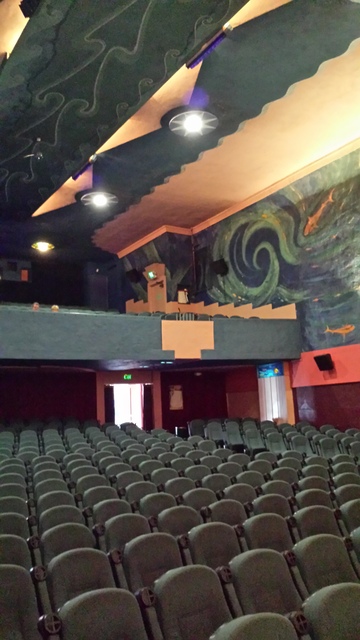 The Lido Theatre was opened on October 27, 1939, and the first film it played was Bette Davis in “Jezebel”. The reason for that was that Davis lived nearby in Corona Del Mar and travelled by the site daily. Upon stopping onsite, she told the owner “they had better open with my picture.” And they did. Davis also is responsible for the sitting parlor in the ladies room that harkens back to a time when women sat and smoked and chatted while arranging makeup in the mirrors. The parlor stools are period pieces and add such a wonderful touch.
Included in tribute to Davis, is a framed lobby card of “Jezebel”, which hangs on the parlor’s wall and greets you upon entrance. There were supposed to be a Men and Women’s room downstairs, but Davis insisted on the the sitting parlor for the ladies, and so the men’s room was relocated upstairs.

The entire theatre has been restored, down to the tile work done in the 1930’s by an Italian family. The tile setting, called Catalina Tile, is only seen in one other site. The original family restored the tile.

The Lido Theatre seats 622, of which 410 seats are downstairs and 212 are in the balcony, which are prime seats for all ages.

The poster cases are original, as is the tiny box office located outside the theatre under the Grand Marquee, and the Lido Theatre still uses manually dispensed real tickets instead of computer generated ones. The Grand Marquee is spectacular, with neon that lights the entire street, and painters and photographers can be seen daily in front of the theatre. Many companies rent the Grand Marquee to use in portfolios or in commercials, and it has been a popular site for film and television backdrops. Even the movie show on the TBN Network, “Master’s Theatre”, filmed it opening on the marquee, and in the projection booth and inside the theatre.

The Lido Theatre has a waterfall red velvet curtain that rises with each show, and no pre-show advertisements are allowed by the owners.

The theatre’s interior features period movie art, from “Gone With the Wind”, “Casablanca”, and others. But a most stunning feature is in the auditorium, where black light illuminates the wall paintings of ocean scenes.
Regency Theatres has put in a sound system that is rated one of the best in Southern California, and even sound engineers rave about it.

(Laemmle does not own the theatre or operate it, but shares its advertising with Regency.)

The Lido Theatre features independent film, and has become a landmark for the independent and foreign genre. However, the Lido Theatre is only a block from the ocean, and surfers of all ages live in Newport Beach, so the Lido Theatre is also the surf film capital of Southern California, and runs a schedule of classic and new surf films. Many surf films, such as “Riding Giants”(Sony), have had their world premiere there, with a parade of Woody’s bringing the stars to the front, where during surf premieres, they walk a blue carpet to the theatre’s doors. Once a summer, senior surfers (60-95) compete on Senior Surf Night to tell tales of local escapades and surfing adventures of times long gone, to the cheers of surfers in their teens and twenties.

The Lido Theatre is also home for premieres of skateboarding, skating, and skimboard films. Regency Theatres also works extensively with the Newport Beach Film Festival(NBFF), and the Lido Theatre is a location for prime features of the festival, which is held each April. Together, the Lido Theatre and NBFF also present cinema treasures, such as a yearly Christmas screening of “It’s A Wonderful Life” to families and children.

The Regency Lido Theatre staff receives thanks daily from generations of families who attend regularly, and it is common to see grandparents, their children, and their grandchildren attending together, and rushing for the balcony seating! The Lido Theatre is located on Via Lido, just off Newport Boulevard as you cross over to Balboa Peninsula in Newport Beach. There are many restaurants and stores in the area, and directly across the street on the bay is Lido Village, a quaint and eclectic group of stores and restaurants. One block away is the pier and the fishing village, and of course, Newport Beach.

The Lido Theatre prides itself on service, with each visitor being greeted upon arrival and thanked as they leave by being offered a special mint, but one of the biggest favorites for movie viewers is on weekends, when noted announcer and restaurant critic, Jim Woodin, introduces the shows with tidbits and trivia, and always gives away prizes to an unsuspecting guest. And as his hand raises to the screen, and his voice booms out, “Ladies and gentlemen, enjoy the show,” the lights go down and Hollywood magic has returned.

It appears Warner’s Clash of the Titans reboot will screen at the Regency Lido beginning Thursday, Apr 1. And in 3D, if you can believe it. Kind of an odd film for the 72-year-old Lido which specializes in art fare. But the real kicker is the 3D presentation. Not even Regal’s flagship 1108-seat Big Newport theater down the road is equipped for 3D. One would have to think with the financial commitment a digital 3D projector requires that a shift is afoot in Lido programming. Regal appears to be taking notice. According to Fandango.com, Clash of the Titans isn’t scheduled to screen at the Big Newport, unheard of for a big-budget event film. Should be very interesting to see how this plays out over the summer.

Keep the LIDO alive folks in that area.

The Lido stands as proof that a single screen house can survive if the owner is willing to work hard and please the customers.

Keep up the great work.

I worked here as a manager for a little while after the renovation. Beautiful location and one of the best movie going experiances out there. Now with the addition of digital projection and first run theatres, this would be my first choice to see movies if I was still in CA. Cool thing about this theatre is its one of two theatres with balcony seating in Ornage County. I hope this theatre becomes a landmark and never goes away.

Here’s a shot ca. January 1975 showing the original configuration of the neon.

What a bad time to plan to renovate a theater…