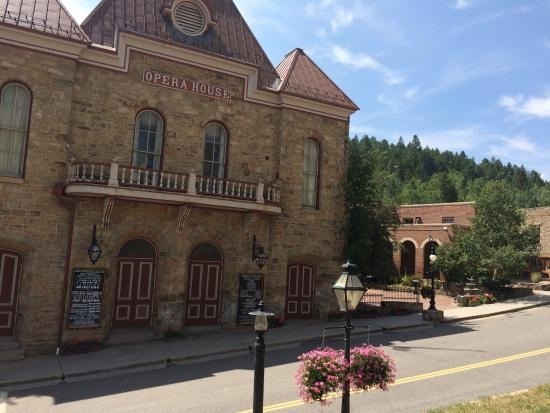 Listed in the Film Daily Yearbook of 1928 without seating capacity.

The Central City Opera House located in the National Historic Landmark District in Central City, Colorado, USA was constructed in 1878 by Welsh and Cornish miners.

In 1877, the citizens of Central City organized a fundraising drive for a grand new opera house befitting the gold mining town’s reputation as “the richest square mile on earth.” Many of the town’s residents were Welsh and Cornish miners, who brought with them a rich tradition of music from their homeland. While locals pitched in during construction, the organizers also retained some of the best building professionals in the area. Denver architect Robert S. Roeschlaub provided an elegant, understated design for the stone structure, and San Francisco artist John C. Massman added elaborate trompe l'oeil murals to the interior. A creek flows through a flume under the Opera House.

The early glory years following the 1878 grand opening were short-lived. Musical and theatrical events appeared on its stage; Buffalo Bill performed here as well as P. T. Barnum’s circus. When the Central City mines were played out, the Opera House fell into disrepair.

In 1929 a dedicated band of Denver preservationists and music lovers formed the Central City Opera House Association and went to work to turn the spotlights back on. A volunteer-driven effort led by Ida Kruse McFarlane, Edna Chappell and Anne Evans led to an extensive restoration of the Opera House in 1932. That summer, actress Lillian Gish opened the newly restored opera house with “Camille”, launching an annual tradition of summer festivals in Central City that continues to this day.

It appears in the credits of the 1975 cowboy film, “Duchess and the Dirtwater Fox” as a site used in a scene where actress Goldie Hawn performs a dance routine.

Maintenance of the building again declined after the 1950’s. In the 1980’s and 1990’s, the entire structure from top to below bottom (the foundation and the flume) has been restored, rebuilt, renewed or revamped, including replacement of the 1920-era lighting relic by a computerized lighting system.

In 1999 the wooden chairs were replaced with plush new theater seating. A memorial to the original chairs is on the grounds of the house. Continuing a tradition from 1932, many of the chairs commemorate Colorado pioneers, notable performers, and opera supporters. Illustrious names like Horace Tabor, Buffalo Bill Cody, Beverly Sills, and Lillian Gish are carved on the backs of the seats.

The opera house was designated a National Historic Landmark in 1973.

As a movie theatre and the restoration:

Designed by Denver architect Robert S. Roeschlaub, the Central City Opera House opened in March 1878. It briefly made Central City the cultural capital of Colorado but declined after the Tabor Grand Opera House opened in Denver three years later. Peter McFarlane eventually acquired the opera house and in 1910 turned it into a movie house. After struggling for years to keep it open, McFarlane showed his final film there on January 1, 1927, and then closed the building for good.

McFarlane died on May 1, 1929, and left the opera house to his three children. The family initially planned to sell it for use as a warehouse or gymnasium, but McFarlane’s daughter-in-law Ida Kruse McFarlane, a professor of English at the University of Denver, thought it should be restored and returned to its original use. With support from Walter Sinclair, head of the Denver Civic Theater, and Anne Evans, a Denver Civic Theater trustee and daughter of former territorial governor John Evans, Ida McFarlane persuaded her husband and the other two McFarlane children to give the opera house to the University of Denver to host summer opera festivals. This was accomplished in 1931, after the family cleared its title to the building by paying ten years of back taxes (only a few hundred dollars).

Ida McFarlane, Anne Evans, the artist Allen True, and the prominent Denverites Edna and Delos Chappell established the Central City Opera House Association. After extensive renovations that cost $25,000, the opera house was ready in time to hold a festival in the summer of 1932. The opera house association got the prominent Broadway set designer Robert Edmond Jones to design and direct a production Camille, with the silent-movie star Lillian Gish in the title role. Jones liked the town and the theater, and his involvement gave the inaugural Central City Opera Festival national recognition.

Opening night was set for July 16. Jones asked the audience to wear 1870s clothing to evoke the opera house’s early days. The Colorado and Southern Railroad ran a special train from Denver to Black Hawk for the festival, with stagecoaches carrying people the final mile to Central City. Milton Bernet, a vice president of Mountain Bell, helped drum up publicity for the opening. The Denver Post ran a special section, stories went out on national wire services, and the New York Times covered the event. The opening ceremonies, held in front of the restored opera house, were broadcast on NBC radio.

The 1932 Central City Opera Festival was a success despite the treacherous drive from Denver (the main route in was a winding dirt road from Idaho Springs) and the lack of adequate lodging options in town. Most performances of Camille sold out, and plenty of other people came to Central City to see the “rediscovered” mining town and take advantage of the city’s decision to allow gambling during the festival. Since then the opera house has hosted the Central City Opera Festival almost every year.