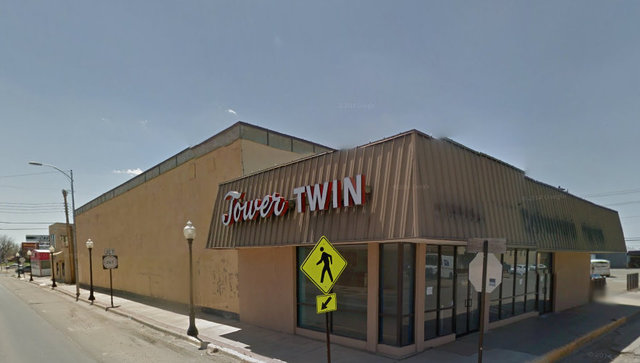 The Portales New-Tribune reported that the Tower Twin was closed by Allen Theatres in June of 2009 after the air conditioning failed. It never reopened because the replacement cost was half the building’s value.

The original Tower Theatre was built around 1950 and the Film Daily Year Book of 1951 lists it with 934 seats. The Sanborn Maps of 1950 show an unnamed movie theatre at this location, across the street from the post office.

More recent history goes back to March 11, 1978 when the original Tower Theatre burned and was rebuilt as a twin by Commonwealth Theatres. It had been a United Artists theatre since 1988 when it was purchased by Allen Theatres in 1990, along with 11 other UA Theatres in New Mexico.

The current owner, as reported in the New-Tribune in December of 2015, plans to renovate the building but no theatre is planned.