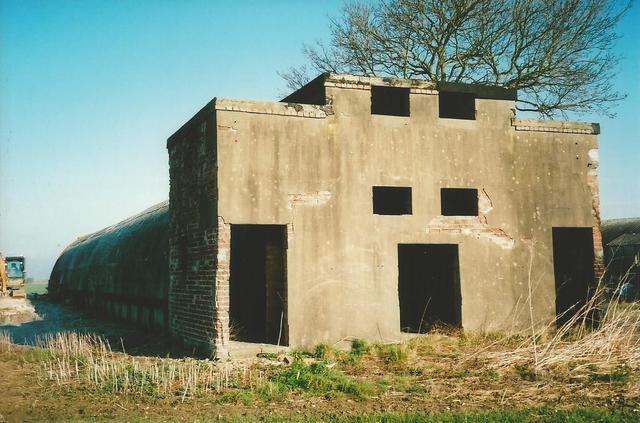 Now situated in the middle of a field, by the tiny Lincolnshire village of Newtoft, near Market Rasen, this building provided screen and stage entertainment to personnel based at the Royal Air Force airfield known as RAF Faldingworth.

Construction of the airfield began, during World War II, on 1st August 1942. There were three runways. The airfield was officially opened on 27th July 1943.

When the war ended, many of the activities were curtailed, although No. 300 Squadron continued to operate. That squadron was disbanded on 11th October 1946, but instead of the airfield being placed on ‘Care and Maintenance’, it was replaced by No.305 Squadron, Polish Air Force. This led to new hope that the station would survive, but this was short-lived, when, on 6th January 1947, that squadron was disbanded, and the station was then placed on ‘Care and Maintenance’.

In 1957 the airfield became a supply station, distributing munitions to other RAF airfields in Lincolnshire. This also included the storage of nuclear weapons during the Cold War period.

However, the end finally came in November 1972, when the airfield closed and offered for sale.

The accommodation blocks were used for a short period as housing for displaced Ugandan Asians, but by the end of 1973 they had been moved on and the station slowly returned to its original use as farmland. Finally, in 1998, the remaining main part of the station was sold-off and is used by a private company.

Of the other buildings, the sick quarters and one of the hangars, along with the footings of a few other buildings can still be seen, in addition to this Cinema.