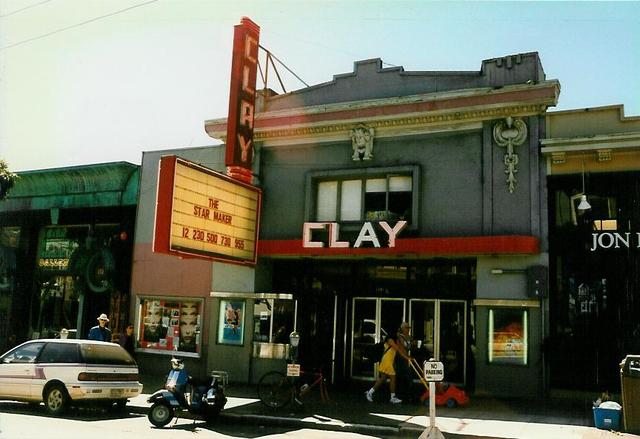 The staff at the Clay Theatre have been informed that the house will close on January 26. The landlord is rumored to have plans that might include demolishing the venerable theater.

And another fine city cinema bites the dust because of development greed.

Jack Tillmany’s Theatres of San Francisco gives a somewhat different (and possibly more accurate) history of the Clay Theatre than we have at this time. It says that the house opened as the Regent Theatre in 1914, was renamed Avalon Theatre in 1931, and became the Clay International Theatre, an art house, on April 11, 1935.

However, it appears that the name Clay Theatre was adopted before the name Clay International. A May 6, 1935 article uploaded to this theater’s photo page by Mike Rivest says that “Herbert Rosener… has taken the Clay Theatre on Fillmore at Clay, changed its name to the Clay-International, and will use it as an exhibition place for outstanding films of European origin.”

I’ve been unable to discover the year the name Clay Theatre was first used, or the year when the addition “International” was dropped. An ad indicates that it had returned to being simply the Clay Theatre by February, 1941.

Tomorrow, Jan 26th is the last day for the Clay Theatre. From the SF Chronicle this morning:

it seems developers in S.F. don’t have anymore love for historic theater buildings than developers in NYC. the Clay is a small theater how can the lot be used for development?

also at least S.F. has something neither NYC or L.A. have.
2 movie theaters build before the advent of WW I. the Vogue
and the 4 Star.

If it is indeed demolished, probably housing. A non profit, the SF Theatre Foundation, which oversees the Vogue and Balboa, is injecting over $1million into the Opera Plaza and in a recent link mentioned on that theatre’s Cinema Treasures page mentions possibly trying to save the Clay also. From that link:

“Meanwhile, the foundation is in talks to save another neighborhood theater: the Clay Theater in Pacific Heights, which ceased operations this month. Jim Herbert said his group is hoping to “help restore and preserve this cultural treasure for the benefit of future generations.”

In late 2010 the SFWeekly (or now defunct Bay Guardian) had an article about the impending closure of the Clay. It was saved and outlasted the Bridge by more than seven years.

What gave the Guild in Menlo Park, another Landmark single-screen theatre, staying power is that to redevelop the lot the owner would need to put in underground parking but it was too small to justify that investment.

A community group came together and formed a non-profit to develop a live-performance venue in a new building.

The current plan is to convert the Clay to a single open space for retail. More info at this link. https://socketsite.com/archives/2021/10/conversion-of-historic-clay-theater-closer-to-reality.html?fbclid=IwAR0k6WV3yN6pvsUCSSBWsHaxhRS_yjNDrYIc1aHb3FylGU0GAMcfZRajQFc

FYI like the Lumiere (main screen), this too had hardwood floors! You could hear footsteps a mile away it was so loud. The Metro, The Col, The Vogue, The Surf, The Stonestown Twin and The Royal had the same problem.