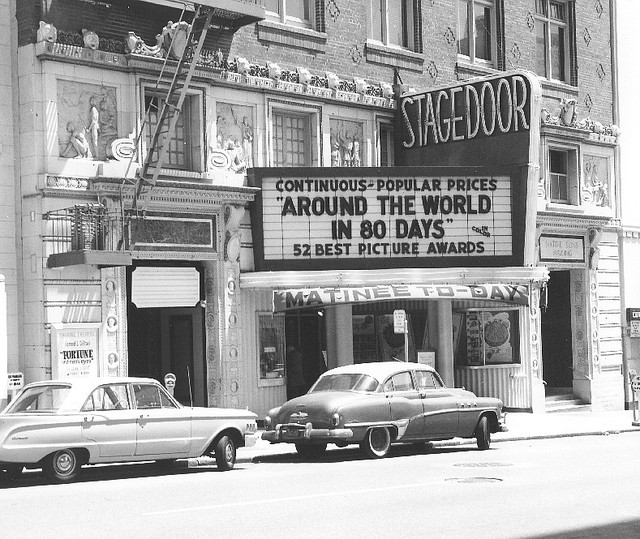 The (Native Sons Building) N.S.G.W. Building was dedicated on September 15, 1912. The theatre operated as the Stage Door Canteen during World War II. Following this it became a movie theatre named the Stage Door Theatre. On May 9, 1958 the premiere of Alfred Hitchcock’s “Vertigo” (filmed in San Francisco) was held at the Stage Door Theatre. From October 9, 1981 movies were still being screened at the renamed Regency III. In recent years it was known as the Ruby Skye nightclub.

In December 2017 it was announced it would be converted into a live-music venue named August Hall (named after the original architect August Headman). After renovations were carried out it opened in Spring of 2018. There will also be a bowling alley in the building.

In the 1980s it was revived as the San Francisco Experience, a multimedia multiprojection show owned by Bing Grosby Productions.

When it was the Stage Door, I saw Lindsay Anderson’s O Lucky Man! here in June of 1973. When it was Regency III, I saw Ferris Bueller’s Day Off in July of 1986.

Never knew it was the Stage Door. I was looking for this one under Regency III. So here it is. Anyway, I lived in SF from 1982 to 2001 and in the early 80s I loved coming to this theatre. I saw Children of a Lesser God , Top Gun and Out of Africa here. It was the only theatre in the union square area at the time (before the metreon was built) and it was convenient and a pretty good theatre I remember (for the time).

I believe (and correct me if Im wrong) that this theatre somehow was damaged or closed for some reason around the 1989 earthquake. that seems to be the time I remember no longer going to this theatre.

Oh now I remember, this theatre reverted to showing live plays because one of the stage theatres around the corner on Geary was damaged during the earthquake and this was used in its place until the other theatre was repaired.

I saw a film with Richard Dreyfus called The Big Fix here. It was a terrible film.

The picture with the Shirley MacLaine film was interesting because my parents took me to it and we had dinner at the steak house next door after the movie.

We moved around a lot because my Dad was in the Army for years.

Here is a link to a discussion about the log book from the Stage Door Canteen, appraised on the PBS show, “Antiques Roadshow”.