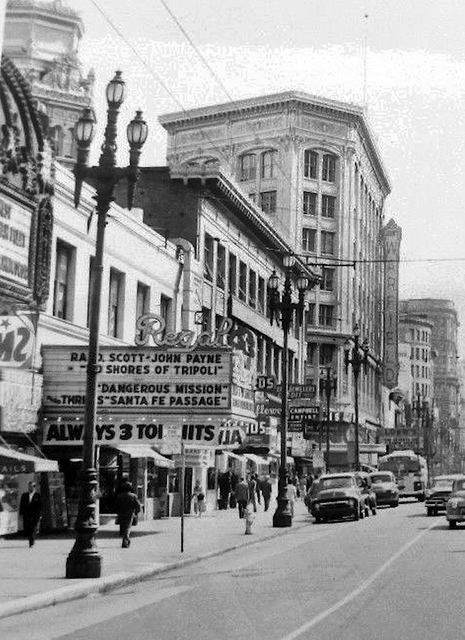 The Pompeii Theatre opened in 1925. In 1926 a Smith 2 manual, 6 ranks organ was installed. It was renamed Regal Theatre on February 8, 1936, opening with Edward Arnold in “Diamond Jim”. On October 30, 1974, it was taken over by the Mitchell Brothers and became the Bijou Theatre screening adult movies. Opening movies were Marilyn Chambers in “Behind the Green Door” & “Resurrection of Eve”.

Later renamed Regal Theatre, it featured live adult entertainment for many years, but had closed by early-2009. It was demolished in late-October 2019.

Interior decor was obviousley somewhat all original when this house operated as the Bijou.
The raked lobby was long and narrow with recessed coming attractions display cases along the left wall, while a carnival type concession stand filled up the right side.
Ticket holders entered the auditorium up a steep ramp and proceeded to either walk down a long single center isle, or go right or left where the isle split into two isles running upward along the entrance ramp. Black painted walls were lined with cast plaster, rectangular yellow frames that concealed indirect lighting. Inside each frame was a large plaster bullseye circle (reminding one of the opening credits for WB cartoons in that these circles were painted bright orange, with red highlighted edges). In the center of each circle was a single 10-watt orange light bulb. Navy blue paint dulled an intricate pattern on a gently vaulted ceiling.
Strange as it may seem, the one and only exit consisted of a sheet glass door from which pedestrians could be seen walking past along Golden Gate Ave.

The Regal is currently closed. I walked by it last Sunday. The entrance is boarded up. The vertical sign has the name covered over. The entire building’s facade has been painted dark green for quite a few years, and looks dirtier and dirtier as time goes on. Many decorative details still survive. To the right of the theatre entrance, one storefront transom window is surrounded by remnamts of a deco remodel from the Thirties. If one looks closely little geometric embossed patterns can be seen. With a lot of money and care, the whole building could be made quite handsome once again. As I always do when walking along that part of Market Street, I paused respectfully at the little “seam” of surviving terra cotta ornament from the facade of the Granada/Paramount next door.

A photo of the Pompeii Theatre’s entrance and marquee can be seen on this page of the March 6, 1926, issue of Motion Picture News.

Here is a 1925 photo of Market Street with the Pompeii Theatre at the left.

I do hope this building is conserved so it doesn’t become more run-down, and that this theatre is eventually restored! That would be great!

According to “The Encyclopedia of the American Theatre Organ” by David L. Junchen, pg. 628, the “Regal Theatre” (noted in the listing as “Opened as Pompeii Theatre”) had a two manual, six-rank Smith theatre pipe organ, installed in 1926.

Does anybody know what happened to this organ and where it (or its parts) are today? Are there still organ chambers in the theatre building?

The Pompeii Theatre was architected by Oliver M. Rousseau and Arthur Rousseau of Rousseau & Rousseau architectural firm in 1925 for Max and Louis Graf. The Grafs went out of the exhibition business in a matter of months but the theater carried on under new management.

This reopened as Regal on February 8th, 1936 and reopened by the Mitchell Brothers as the Bijou on October 30th, 1974. Grand opening ad in the photo section.

The Regal Theatre building is being demolished this week (Oct 24 2019) on Market ST in San Francisco CA. Check out my current photos on the Regal photo page. Destroyed for a new condo building that will sit empty or sold for give a way prices as the street is so bad now. To think the great Paramount Theatre was just next door also gone and replaced by a new building. No more B second run movie theatres left on Market St. Glad I went to a few in the late 1960’s when they had movies at bargain prices in high school. My favorite also was the Pix and Hub Theatres. The Pix Theatre building is still there but has two stores built in. Long live the Regal Theatre SF CA. The bums now on Market ST could have watched movies all day with their wine bottles If It had stayed open. So many sailors visited the Regal Theatre in It’s hay day, It gave them movie enjoyment when on leave in San Francisco and walking on a much nicer and safer Market St.

Motion Picture Herald, Feb. 23, 1952: “Jesse Levin has purchased the 393-seat Regal on Market street from Mrs. Aaron Goldberg. This was the last theatre of the Goldberg chain."