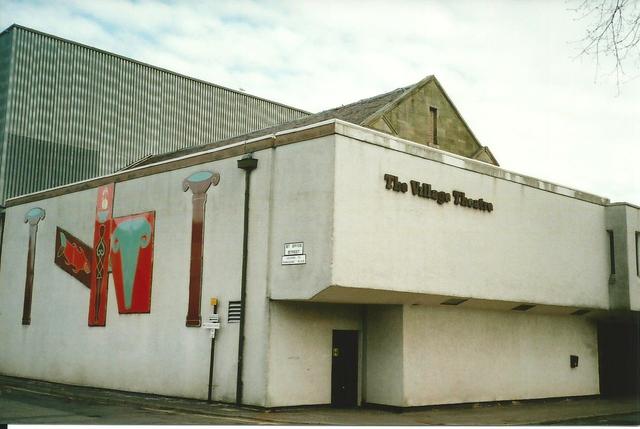 East Kilbride, South Lanarkshire, was designated one of Scotland’s first ‘new towns’ in May 1947, thus ensuring that the former village, with just 900 inhabitants in 1930, grew into a town with a population of over 5,000 by the early 1950’s.

The new town’s first cinema, the Picture House, opened in a Public Hall that had been built in 1883.

According to the 1940 Kinematograph Year Book, it was leased by F. Palmer and was equipped with a British Thomson Houston(BTH) sound system. By 1953 the proprietor was listed as Alfred Palmer; there were 280 seats. The Picture House was still open in 1954 and had closed by 1963.

During 1974/1975, the Town Council decided to convert the Public Hall into an intimate, modern designed live theatre. The brief for the new theatre called for the structure of the Public Hall to be retained; this determined the size and capacity of the auditorium. The remaining structure was built around the hall and, as a result, the roof of the old Public Hall is visible from Maxwell Drive.

A competition was held to find a suitable name for the venue and ‘The Village Theatre’ was selected from nearly a hundred entries. The first production was East Kilbride Rep’s pantomime “Sleeping Beauty” in December 1977. The theatre was officially opened in 1978 by Scottish actor Andrew Cruickshank, well known for his role as Dr Cameron in the BBC Television series “Dr Finlay’s Casebook”.

The Village Theatre is a traditional ‘proscenium arch’ theatre with seating for up to 318 patrons. It is equipped with a fly-tower, an orchestra pit and extensive lighting and sound equipment. There are six dressing rooms.