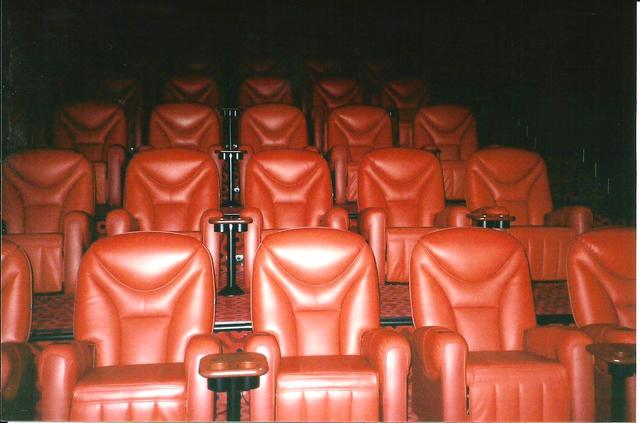 In Krakow, Poland, this Cinema City ‘gigaplex’, which opened in November 2009, is situated in the Bonarka Centre, a giant shopping mall on the site of a former chemical plant in Podgorze.

The 20 auditoriums seat between 26 and 318 patrons. Many are sponsored by businesses. Three are VIP screens. As well as current releases, the presentations include films that have been released over the past year, making it an ideal venue to catch up on films missed on first release.

Posted a picture of screen #11 taken today. This is one of the larger theatres (16 rows of 22 seats minus some seats for a vomitorium). Good auditorium structure with comfortable seats, stadium seating and a nice curved Cinemascope screen, alas without screen masking. I saw the re-run of The Empire Strikes Back on DCP. Projection was pristine, a rarity in today’s modern suburban multiplexes, with good control of sound level for both the feature film and the ads and trailers, light level on screen, picture scaling, how and when they dim the auditorium lights. The DCP itself could have been made from a better master as the picture quality was not consistent throughout the movie, but this isn’t a theatre-related issue.

I never go to this cinema from the southern part of the city, far from where I stay, and usually prefer the more centrally located Cinema City Kazimierz. I need to mention though, that I saw Samsara in 4K at Cinema City Bonarka in 2012, one of the rare cinemas that showed it.

Cinema City, of course, are part of Cineworld Group* and they share a common current “house style.” (Different signage, of course, and colours, etc. But still the same “sparkle” tile foyer decor, etc.)

(* Or were. I have no idea what’s happening with Cineworld Group–other than their stock was the “most shorted” last year!)

Looking at your photo, it appears to have same Lino Sonego red upholstered seating that Cineworld uses fitted in the auditorium that you visited; the sidewall stretched fabric design is different. The older photos posted by DavidSimpson look rather dated in multiplex terms (hard to believe it opened in 2009?)

Projection was pristine, a rarity in today’s modern suburban multiplexes

I’m surprised to hear that it’s a “rarity” there.

For the main feature, I don’t think I’ve ever experienced out-and-out dire quality digital projection anywhere. (Albeit 3D I’ve only ever seen in well-equipped venues.) A local Odeon has a “premium large format” (“ISENSE”) screen with 2x4K NEC projection (very good), whilst all Vue auditoria (except for one IMAX!) use Sony 4K projection and just above all of those I’ve visited are at least decent…

“Presentation,” of course, is another matter…

The DCP itself could have been made from a better master as the picture quality was not consistent throughout the movie, but this isn’t a theatre-related issue.

I assume that it was not the 1997 re-release version (with the CGI VFX makeover etc.?) AFAIK that was the last time there was a full new transfer/restoration from the best available sources (original negatives where possible.)

Of course, this is expensive and painstaking work… (e.g. There are lots of so-called “remasters” released on Blu-Ray etc. which simply repurpose the same old high def. telecine transfer from interpositives.)

Does that offer a better standard of picture/sound than the typical “suburban” multiplex over there?

It was the “Special Edition” from 1997 with effects added or improved, except for some shots lacking contrast and sharpness probably due to originally using higher-sensitivity film stock for lower light environments, which could have been better restored by taking the most out of the negative. I noticed scenes in the other two episodes back then in 1997 which deserved restoration but, for some reasons, they were left in their original condition of 1977/80/83.

I prefer the Cinema City Kazimierz because it’s more central and more convenient for me, and located in more pleasant surroundings.