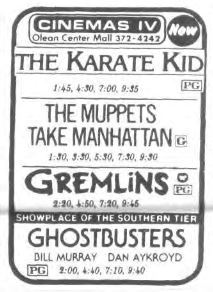 Opened in November 1977 as a 3 screen theater, part of Olean Center Mall. (Opening date of the cinema was after the mall opened in 1976). A fourth screen was added in a storefront opposite the original three-screen location. The largest screen was split circa 1990 to create a five-plex.

Part of the Manos Theater chain.

Theater closed during the 1990’s. The site is now occupied by a JC Penney’s.

I was hired before the theater opened in November of 1977 to be the assistant manager of the newly built theater owned by Manos Enterprises of Greensburgh, Pennsylvania. One indelible memory was holding onto the ceiling while helping to install the screens; it was a long way to the floor.

The design was unique because you entered from inside the Olean Center Mall instead of from outside as was the norm of the day. In other words, you could wait in line in climate controlled comfort!

The first film shown for the grand opening of the (then) Cinemas III was “Bobby Deerfield” starring Al Pacino. The “big” house seated 360 people, the middle house seated 235 and the small house seated 160. The big house had 4 track stereo processing by Eprad, with Eprad equipment used throughout the complex and all expansions. The first stereo film shown was “Grease” on a second run in 1978.

Bob LaCava of Manos Enterprises was the first manager followed by Dan Hughes and David Borton.

A fourth Cinema (seating 295) was added across the hall from the original three-plex around 1980, while the original “big” house was split around 1990 to make the complex into Cinemas V.

Around 1993 the owners decided to open a new theater on the west side of Olean near St. Bonaventure University where there was a major retail expansion. In the course of building the new theater (an eight-plex) they were approached by Carmike Cinemas, who took over the project and now run the Carmike 8 in Allegany, New York.

^WSL… I’m curious why it took until a second-run of “Grease” for this theater to present a movie in stereo? My understanding is that those Eprad units were compatible with Dolby-encoded prints, and there were several Dolby releases during the timeframe of the theater’s late ‘77 opening through the timeframe of the summer '78 “Grease” release. “Close Encounters” (a Dolby release), for sure, played there during winter 77/78; why wouldn’t it have been presented in stereo?

I think that we ha run stero before grease. I am not sure of the date, but when the first Star Trek movie came out, the chief engineer of Eprad showed up with a new Mother Board for the big theatre, and it made a big difference. These were early days of Digital Stereo, and Manos being a small company was doing their best to present Stereo to their patrons. Eprad,, though not the best equipment, permitted Manos to expand their circuit of theatres into small towns that the really big companies didn’t want any thing to do with. Dan Hughes Former Manager 78 to 86.