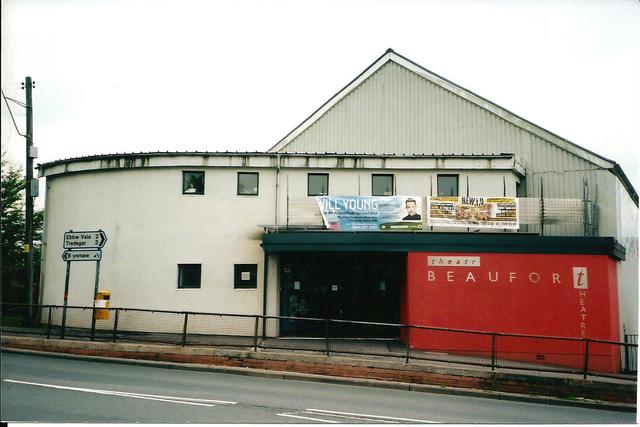 In Beaufort Hill, on the outskirts of Ebbw Vale, Gwent, one source (a local history) states that the Electric Theatre only operated for a few years in the mid-1920’s, while the Theatres Trust gives the date of construction as 1908. It could, of course, have been built for another original purpose, but that is unlikely.

It is unclear what happened to the building after closure as a cinema until 1960, when it was acquired by the council and became The Beaufort Theatre & Ballroom.

A multi-purpose venue, the theatre hosts a wide range of performances and events, from drama to dance - but no film shows.

The ballroom can accommodate 180 standing and 130 in cabaret mode. There is a small stage and a sprung ballroom floor.

The Theatres Trust describes the building as having “been constructed on the side of a hill. The brick built entrance is flanked by metal sheeting on the other three walls. The roof is grey slate. The proscenium arch stage is raked and has a grid with 12 hemp sets and a safety curtain. The auditorium has raked seating in navy blue with blue carpets. The ceiling is of wood panels in to which lighting positions have been fitted.”