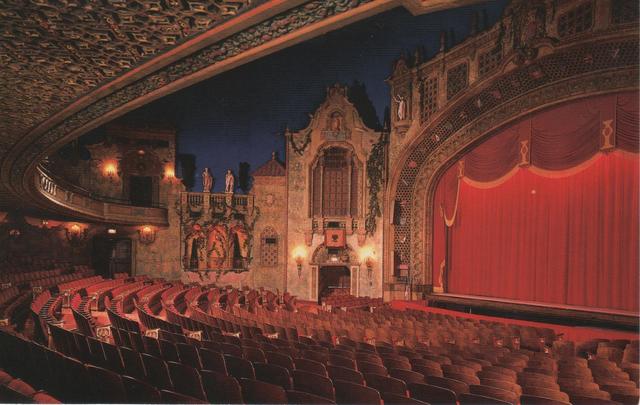 John Eberson designed this beautiful Atmospheric style theatre which opened on August 30, 1928, with William Haines in “Excess Baggage” on the screen and Keith-Albee vaudeville on the stage. It had 1,548 seats. The Palace Theatre also houses a 3/10 Wurlitzer theatre organ. It was restored and reopened July 4, 1976 with a production of the stage musical “1776”.

Several years ago I traveled to see the Palace in Canton Ohio and didn’t continue onto Marion Ohio to see this Palace though I do see similar simaliarities in the above posted flickr photo. Is that a tongue twister? Didn’t mean to it to be! ;–)

I returned to the Palace on April 3, 2010 and saw the movie, Percy Jackson & the Lightning Thief. I can only add, “This is how movies should be shown” I bought a good size drink and popcorn for a grand total of $3.00. The lobby of the Harding Hotel (now a Senior’s home and directly across the street from the thatre) is also a must see.

Richard G: I, too, have visited the Palace in Canton though didn’t see the Harding Hotel lobby…sounds like I missed a “must see”.

From the 1920s a postcard view of the Palace Theatre in Marion.

The view of the marquee and upright is now a little bare. During an inspection the facade holding both the marquee and upright was found to be unstable and both were removed and repaired while the facade was torn down brick by brick, the large I-beams replaced and will be restored to original build. Donations would be appreciated. marionpalace.org for contact information.

“Designed for “talkies,” the Palace had to open [in 1928] with a silent motion picture [Excess Baggage] because the needed equipment for sound motion pictures had not arrived. The success of talkies, a new technology only two years before, had been widely successful. Vaudeville could not compete, and its own stars contributed to the demise of its popularity as they recorded their acts on film, resulting in no demand to see live acts that had already been seen on film.” Hoffman, Scott, A Theatre History of Marion, Ohio: John Eberson’s Palace & Beyond, p. 11 (History Press 2015).