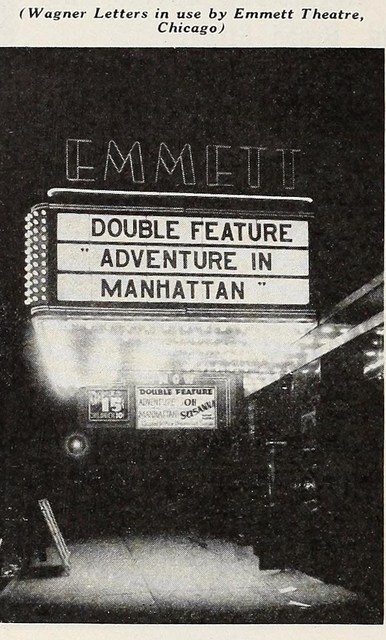 Located in the Canaryville neighborhood, the Adam Theatre was built for the Brunhild & Young circuit in 1912. The theatre was renamed the Emmett Theatre a year later. It was located on S. Wentworth Avenue, near 43rd Place (not far from where Interstate 90/94 runs past today).

The Emmett Theatre was renamed the Atom Theatre on December 23, 1945, and continued to operated for another six years, last as part of the Gollos Brothers chain.

Today, the building houses a church.

The body of Harry Martin, 27, of 7132 Ellis av., manager of the Atom theater, 4338 So. Wentworth av., missing since July 24, was found yesterday in two feet of water in an abandoned clay hole at 122d st. and Winchester av., Calumet Park. Police said they believed drowning was the cause of death.

Martin was last seen about 2:30 a.m. on the day of his disappearance by William Pagels, 23, of 235 Root st., assistant manager of the theater, when they parted at 63d st. and Yale av., after visiting several taverns and a dance hall. Martin told Pagels that he planned to go to another tavern.

The theater manager had about $120 when he was with Pagels. Police said they found only 12 cents in his pocket.

A view of the former theater can be seen on Google maps.

does anyone have any information on who owned the Atom/ Emmett Theater (4338 Wentworth Ave. Chicago, IL) in the early 1940’s?