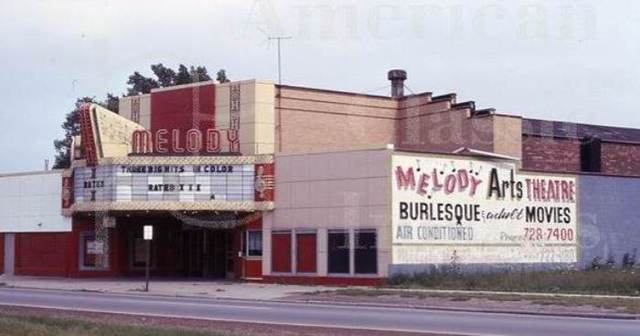 The Melody Theatre was opened on January 1, 1948. It operated as a movie theatre with occasional church services held on Sunday. Used in 1971-1972 as a concert venue. Then it became an adult move theatre soon after. It was eventually shut down by the city in 1997 for illegal activity, and was considered non-salvageable and was demolished on August 19, 1999.

The site of the theatre is now the cement company next door, as it has expanded.

Oddly enough it once functioned as a ballroom/venue
Here are some acts that played there:
View link

Disturbing arcticle about the undercover investigations

This link will take you to a better list and posters of acts who played here.

INKSTER — Demolition crews tore down the triple-X Melody Theater Wednesday to the honking of horns and cheers and applause of several dozen residents and officials.

The adult theater — which police raided numerous times to arrest customers on indecency charges — was an embarrassment to residents and a headache for elected officials since its most recent owners took over in 1977. Signs outside the Michigan Avenue theater advertised 25-cent peep booths.

I love the marquee in the Water Winter Wonderland listing above: “Michigan’s Finest Adult Movies”. What a laugh.

Boxoffice of February 21, 1948 noted the opening of the Melody Theatre at Inkster by brothers Leonard and Bernard Brooks. The November 27 issue of the same journal noted that the Melody, which had opened on January 1, marked the establishment of the Affiliated Theatres circuit, which took over operation of four other Michigan houses the same day. Owners Leonard and Bernard Brooks and their nephew Arnold Brooks London had owned the Admiral and President theaters in Detroit for some time.