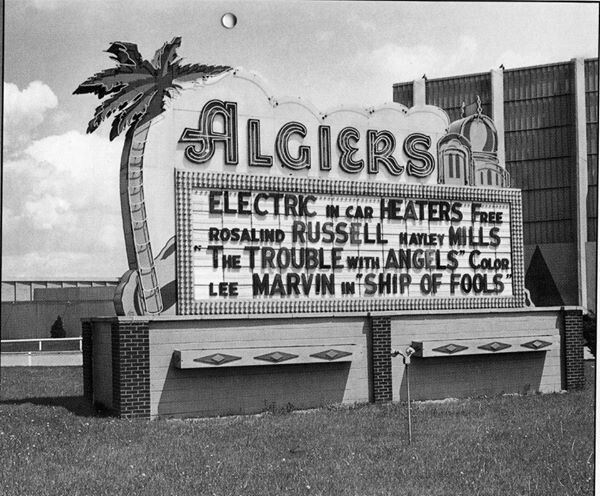 Opened by Wayne Amusement’s on August 15, 1956, with the John Wayne western “The Searchers”, playing on its 120-foot wide screen.

It soon later became a part of the Quo Vadis, a movie theater nearby, where restaurant-goers could watch films while dining.

It was closed and demolished in 1985 to make way for a shopping center.

I am sure it was not just 1 screen.

The Algiers Drive In was not the first drive in built by the Wayne Amusement Company. That honor goes to the Wayne Drive In, which opened in 1949. Also, the screen wasn’t 216'; it was 120' wide and from the ground to the top of the screen tower it was 80' high with the actual screen height of 60'. Lastly, the Quo Vadis was developed mostly on the land that the exit driveway for the drive occupied. A few spaces were lost on the western ends of the ramps for the theater also, but the drive in added 7 ramps in the back of the field to make up for the loss.

This theater was a single screen theater until 1982 when a second screen was added. There were plans to add a third screen that were never followed up on. The drive in was successful until the it closed in 1985. However as was the case with most drive ins the Algiers was originally built out in the country and the suburbs gradually expanded around it. As the area built up, property taxes also increased until the taxes on the 20+ acres that the drive in occupied were more than the net income the theater generated.

Approx. address for this drive-in was 34850 Warren Rd.