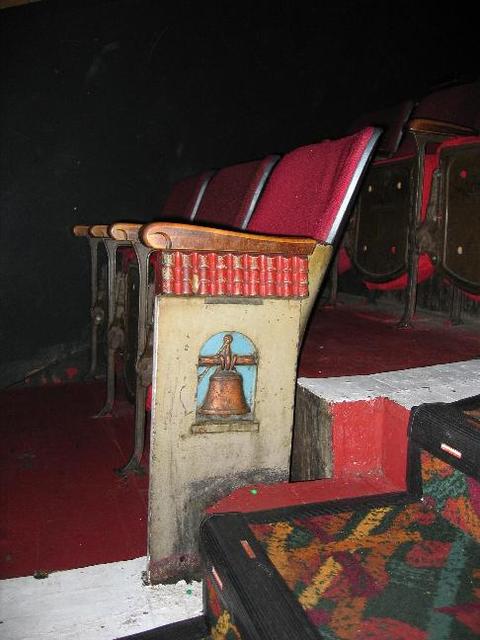 The Carmel Theatre opened in 1938.

A photo I have seen of the Carmel shows a theatre that looks like it could have been designed in the late ‘20s or early '30s. The article accompanying the photo says all murals and decoration was done by Heinsbergen Studios.

A friend of mine who knows well of such things, swears he saw organ pipes scattrered about during the demolition in 1959. 1936 is far too late for the theatre to have had an original installation theatre organ, but perhaps it was moved from another theatre.

The library’s data page for the the photo ken mc linked to dates it to the 1930s, not specifically the year 1930. The fastback auto at the left indicates a date no earlier than the late 1930s- my guess would be 1937-1939 for this photo.

As for the building itself, the June, 1935, issue of Architect & Engineer carried an item which said that S. Charles Lee was preparing plans for a theatrer at Carmel for the Monterey Theaters Company. It was to replace a theater which had been destroyed by fire. Here’s the California Index card citing the article.

The style of the building in the photo harks back to Lee’s 1931 design for the Fox Florence Theatre in Los Angeles, so certainly bears his stamp. Carmel was not a big town in the 1930s, and I doubt it would have supported more than one local movie house, especially with other theatres being only about four miles distant in Monterey. I’d say there can be little doubt that this photo depicts the Carmel theatre in Carmel.

The theater destroyed by fire mentioned in the previous post would be the Golden Bough Theatre (not to be confused with a later theater of that same name built after WWII and run by UA in its later years and now used for live presentations). The “old” Golden Bough was entered through a courtyard, called The Court of the Golden Bough, which still remains. At least one wall of the old auditorium can still be seen further back on the property if one looks carefully. Later buildings were built up against and around it.

According to an article in the Salinas Californian of December 24, 2005 (.pdf), The Golden Bough fire took place in 1949, and destroyed a theatre which had been opened in 1924 as a playhouse called the Arts & Crafts Theatre and was subsequently known as the Abalone Theatre, Carmel Playhouse, and Filmarte before becoming the Golden Bough Theatre. The current Golden Bough Playhouse dates from 1951. The 1935 fire must have destroyed a different theatre.

This gets more interesting. Apparently there have been three Golden Bough Theatres, and the first two were both destroyed by fire. The original was built on Ocean Avenue in 1924 by Edward G. Kuster, a lawyer and cellist who designed the theatre himself. It was destroyed by fire on May 19, 1935. Kuster had purchased the old Arts & Crafts Theatre in 1929, and when the Golden Bough was destroyed he moved the play then in production there to the Arts & Crafts Theatre. At some date the Arts & Crafts/Abalone/Carmel Playhouse/Filmarte Theatre was given the name Golden Bough. This was the building which burned in 1949, and the Current Golden Bough Theatre was erected on its site in 1951.

Now here’s what I’ve found so far about the second Golden Bough when it was a movie house called the Filmarte. It was operated by a partnership of Dick Bare and Bob Edgren. They had to have been operating it after 1933 as there are references to the Filmarte having shown the Hedy Lamarr movie “Ecstasy” which was made in 1933. This is referenced on this page, which says that Dick Bare filmed a movie called “Famous Places” in Monterey in 1937.

I also found a reference to Dick Bare in an obituary of a fellow named Wayland Fink who grew up in the Stanislaus County town of Patterson, where his parents had bought the local movie house from Dick Bare (this was probably sometime around 1930.) Other that that, results from Googling “Dick Bare” are mostly unspeakable (just try Googling that name with “safe search” off!)

There are more (and more savory) results Googling the name his partner Bob Edgren, because Bob Edgren was apparently the son of a well-known cartoonist, Robert Edgren, (unless Bare’s partner was the elder Edgren, but he died in 1939, and the only obituary I’ve found for him says nothing about him owning any theatres.) Lots of Google hits about the elder Edgren’s newspaper career aren’t useful when hunting down information about theatres, though.

But it seems most likely that Architect & Engineer got the story a bit garbled and that what actually happened was that Dick Bare and Bob Edgren were renting the theatre they operated as the Filmarte from Edward Kuster, and they had to give it up in 1935 when the original Golden Bough burned and Kuster took over the Filmarte as a new location for his stage productions.

And then the Carmel Theatre was built in 1936 not to replace the burned theatre, but to replace the theatre which had been lost as a movie house because a different theatre had burned. However, the Carmel was built for the Monterey Theatres Company, and that company’s representative was, according to the reference in the California Index, E.H. Emmick who, according to other references in the Index, was once president of T&D Jr. Enterprises (1924) and was later head of Golden State Theatres (1940.) What business relationship there might have been between him and Bare and Edgren in 1935 remains a mystery to me. Maybe Emmick was just being an opportunist, taking advantage of Bare and Edgren’s misfortune.

In any case, puzzles to unravel.

Whether S. Charles Lee did any work for the final design of the Carmel Theatre or not, there is information about his relationship to it in Box 1, Folder 22 of his collected papers, according to the online finding aid for the collection at UCLA. If somebody with access to the collection itself comes across this page, I hope they’ll take a look at what’s in that folder and report back to us about it. If there are photos or drawings of it, they probably haven’t been digitized or they’d probably be on the Lee website.

I have a very hazy memory of seeing the theater in the process of being torn down, when I was just a toddler. I remember that the side walls were still standing, but the roof was off. After so many years, my memory could certainly be faulty, but I have the impression that there was some sort of mural on the inside wall that I could see. Anyone know if there was such a mural?

Speaking of the original Golden Bough… a recently-deceased former Carmel High School teacher named Peter Lyon had in his possession a black-and-white home movie taken by his father during the 1935 fire that destroyed the theatre. He showed this film to a class I was in back about 1973. I remember him mentioning that the theatre owners had made noise about taking some kind of legal action against the fire department (or the city) on the grounds that their water pressure was too weak to effectively fight the fire. Mr. Lyon’s father’s home movie was used to prove that this was not so; I clearly remember seeing the streams of water from the hoses shooting straight up past the burning roofline.

My father was in his mid 20s at the time, and he told me he could see the plume of smoke above the trees all the way from the beach.

I wonder why there is no page on this site for the Golden Bough—either the original, the second one, or the current movie-theatre-turned-playhouse (where I and the rest of the Monterey Peninsula population saw the original Star Wars in 1977).

We had a gent named Gil (“Im from the east coast.” is all hes tell me) come by the Playhouse yesterday who said he was researching Kuster and the Monte Verde Golden Bough specifically. He didnt seem far into it though. He was very curious about the police’s investigation into the 1949 “By Candlelight” fire. He didnt seem interested in the first Golden Bough and its “By Candlelight” fire. Im not even sure he was aware of the “By Candlelight” connection and didn’t know the Pine Cone from the Herald. And he was even surprised to learn the Filmarte/Circle Theater existed. I gave him the very abbreviated tour as things we’re hopping in the office and…of course sent him here.