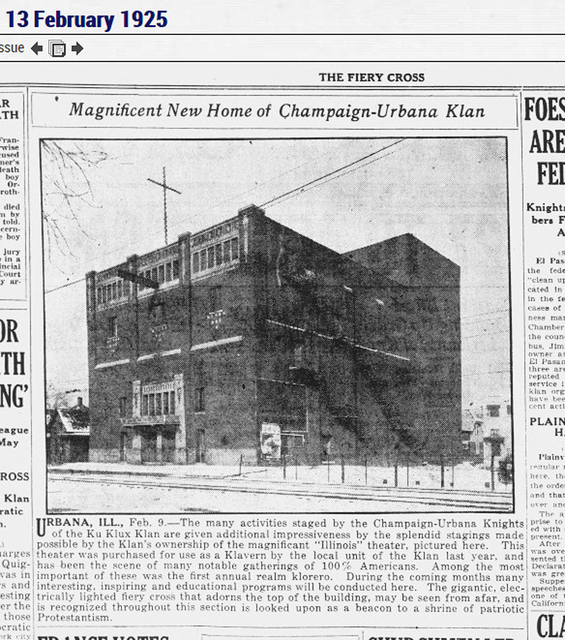 Opened March 3, 1908, the Urbana Opera House originally hosted live theater, vaudeville, and later, motion pictures. It was renamed Illinois Theater but on April 3, 1927 the theater was destroyed in a fire. Today, the site is occupied by the Opera House apartment building.

Here is the paragraph about the Illinois Theatre from a document about the Joseph W. Royer Arts and Architecture District, an historic neighborhood of Urbana with several surviving buildings designed by Joseph William Royer, architect of the lost theater:

“This four-story brick structure was built by a group of Urbana stockholders on land donated by the Flatiron Building Association. Construction began in early June 1907, and the new theater was formally opened on March 3, 1908. Local and nationally known artists such as Enrico Caruso, Al Jolson, Jenny Lind, and Sarah Bernhardt performed in the theater. From 1923 the building was owned by the Zenith Amusement Company, a Ku Klux Klan organization, which used it primarily for Klan activities. On April 3, 1927, the theater burned down. The walls survived, and the ‘Tuscany’ Apartments were built in the burnt out shell.”