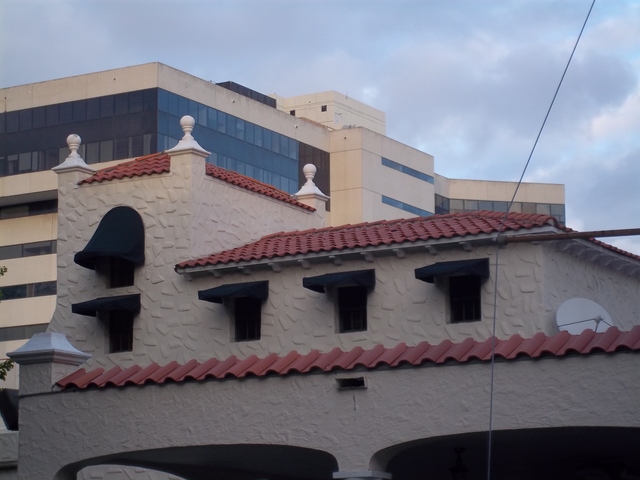 In the Coral Gables Museum, a display on the back wall of the permanent exhibit “Creating the Dream: George E. Merrick and His Vision for Coral Gables” about the founding of the City of Coral Gables says the city’s first cinema was the Dream Theater, an open air/outdoor movie theater “reminiscent of a Spanish bullring” near the corner of Ponce De Leon Boulevard and Giralda Avenue.

In 2016 there is a parking lot for Bank of America on the site of the auditorium. According to local historian Dr. Paul George, the short tower-like structure above the drive-thru at the rear of the building with two small windows one above the other was probably the projection booth. The windows overlook the parking lot behind the bank, which would be where the seating and screen had been, with the screen facing Ponce de Leon Boulevard. A staircase leading from Giralda Avenue up to the projection booth is still on the side of the building.

The rest of the structure that currently houses the bank and a French bakery may have been added on sometime after the theater closed due to the Great Depression.

The display in the Coral Gables Museum includes a Spanish-style depiction of a man on a horse which may have been the theater’s logo, the image of a newspaper advertisement for opening night, a replica of the poster for the opening night film, and a television screen with scenes from the film playing on a continuous loop.

To see the projection booth, position Google Street View in the ally on the left side of the bank. Enter the ally and proceed till there’s a parking lot on your right, then pivot right so that you see the bank’s drive-thru. Look for the two windows, one on top the other with blue awnings over them, in the short tower above the drive-thru. That’s the projection booth, adjacent to three other windows with blue awnings next to each other. The parking lot is where the outdoor theater, “reminiscent of a Spanish bullring” according to the museum’s display, would have been.

The Coral Gables Museum is one block away at 285 Aragon Avenue. (Actually, if you continue down the ally to its end on Street View, you’ll end up behind it.)

The Coral Gables Museum homepage is currently an image of the permanent exhibit about the founding of the city. The display about the Dream Theater is on the other end of the room under the word “DREAM” in neon light, with a man on a horse and a television screen below it.

A glimpse of the Dream Theater display can be seen on Youtube from 1:42 to 1:49 in the video “Coral Gables Museum: Year One“.

Imagine you are at the grand opening of the Dream Theater as the film is about to begin…then click on this.

Never heard of this one before.

I question the whether those little windows were the projection access. I believe the tower was truncated and that would be the tower, but the windows would have been higher and next to each other so the could change from projector to projector without effort. It was only opened for two years.

I visited the lobby of this Bank of America branch on June 19th, 2019.

The architecture around the rear door that exits to the parking lot looked to me like it might be left over from the Dream Theater, and I enjoyed the feeling that the staircase at the right rear of the lobby that leads to the tower and offices above the door may be the same once used by the projectionists.

Click here for a photo taken from the parking lot in 1986 and some more description.

You can now visit the parking lot virtually via Google Street View images taken in February 2019 to see where the outdoor auditorium had been, the back of the building, and projection booth tower.

Wow, check out this view of the outdoor auditorium that I just added to the photos section. So this once existed where a parking lot is now behind what today is a the Bank of America. I never thought I’d get to see what it looked like.

And click here for an article from the website of the Coral Gables Museum about the history of the Dream Theater.

It includes that the Dream Theater was designed by architects John and Coulton Skinner, “yielding a capacity of 1500” which apparently refers to the number of seats, and closed sometime between 1927-29.