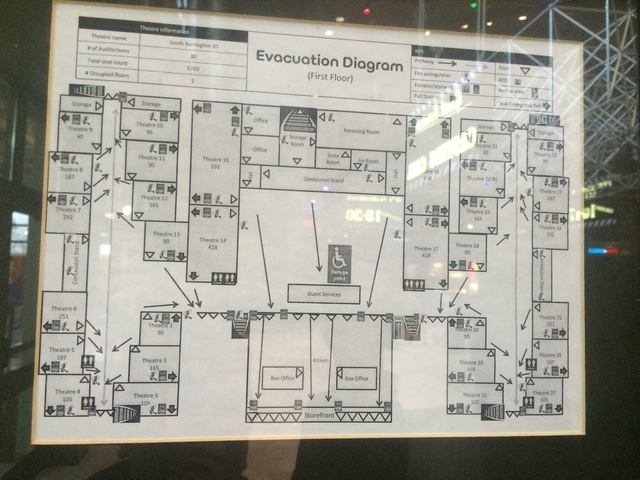 The AMC South Barrington 30 opened in March 1998. This was one of the two megaplexes opened in the Chicago area (the other is the AMC Cantera 30 in Warrenville).

All 30 screens have stadium seating and three concession stands. This is the first theater in the Chicago area to have the DLP (Digital Light Projection) system on one screen. In Spring of 2009, one of the larger screens was converted into an IMAX screen and by early-2017 the number of screens had been reduced to 24.

There was originally a plan to put a AMC 30 in Burr Ridge, too

Apparantly they are showing Bollywood films here too!

Cinemark announced plans in 1996 shortly after AMC to build a 20-to-30 screen at I-88 and Rte. 59 in Naperville, and later a 20-24 across the street at Barrington and Lakewood (this would be Hoffman Estates). The struggle was related to an annexation battle; the property the 30 sits on was de-annexed from South Barrington and would have been annexed to Hoffman, but was re-annexed contingent on approval of the 30. The name was also going to be AMC Studio Centre (thus the street name) but was changed shortly before opening. It opened March 1998.

Architect was William Timper, at the time AMC’s chief architect.

This theater has a new Imax screen now. Has anyone tried it yet? I saw two movies on it so far. It’s pretty nice. Big screen and great sound. It’s on one of the screens by the main concession stand, so it’s in one of their biggest rooms.

Interesting this theater is a complete duplicate of the AMC 30 in Covina, CA. I’ve been to both and other than the enclosed ticket area to accomodate the cold Illinois winters, it is the same.

I’d be pretty sure that all the 30-plexes were just about identical.

March 20th grand opening ad for this cinema an the Cantera 30 has been uploaded here.

They’ve gone to recliners now and cut down to 24 screens. Many of the auditoriums only seat 30 now.