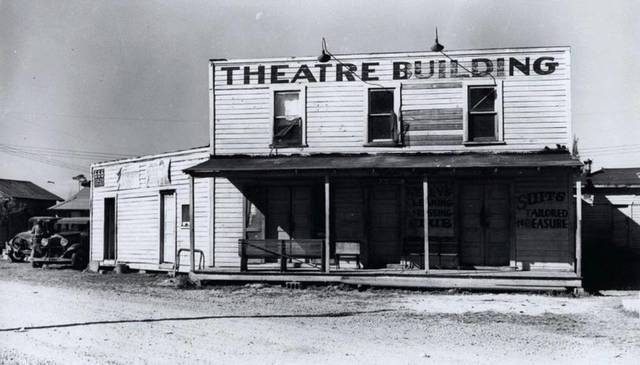 A photo in the Miami Herald archives shows the Ritz Theatre, that served the African-American community during segregation and burned shortly after the picture was taken in January of 1939.

In May 2015, Google Street View shows the approximate location of the Ritz Theatre, on SW 4th Street near Railroad Avenue, as empty lots.

Later in the 1940’s, the Ace Theatre would open farther west on 4th Street and serve the community until 1974.

Here is the photo of the Ritz Theatre.

The Miami Herald article that mentions the Ritz, “Homestead’s Historic Seminole Theater: Restored and Once Again a Community Treasure”, can be viewed here.

The Cinema Treasures page for the Ace Theater that opened farther west on 4th Street to serve the African-American community can be viewed here.

The photo also appears on p. 36 of the book “Jesse Robinson of Homestead: Remembrances and Recollections of Jesse James Robinson, Sr.”

The caption in the book says the theatre was owned by Lester Lawrence, Sr. and had 250 Seats.

The photo was originally taken by Marion Post Wolcott for the Farm Security Administration in January of 1939.

In the photo Rev. Fred Lloyd’s barbershop is on the left. To the right of that is a store owned by Prince Ferguson’s that sold soda, peanuts, candy and ice cream – with the ticket window for the Ritz next to the door! The business on the far right was Nelson Kelley’s Pressing Club, where clothes were sent out to be dry cleaned, then pressed at this location. The second floor was the projection room and sleeping rooms for rent.

There is a copy of the book available to be checked out at the Homestead branch of the Miami-Dade Public Library and two other non-circulating copies at the Main Library in downtown Miami.

You may be able to buy a copy from the Florida Pioneer Museum in Florida City or the Homestead Historic Town Hall Museum. It includes many historic photos.