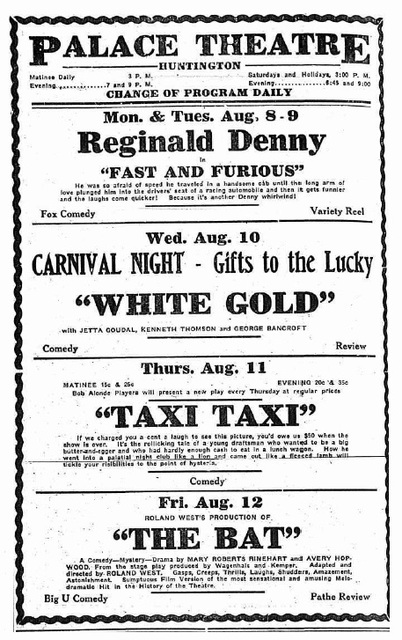 In September 1915 it was announced that Huntington, Long Island would, at last, have a real theatre. The Huntington Amusement Company purchased the property for $20,000 and allocated another $40,000 for the construction. The site had a 59 foot frontage on New York Avenue and a depth of 135 feet.

The building was to be constructed of terra cotta tiles with the exterior walls 12" thick. The front of the building would be red and cream and have a 6 by 9 foot marquee. Stores would flank the lobby entrance.

The main auditorium would be 75 by 69 feet and have a floor with a slope of four feet. The interior walls would be light green and gold with mahagany woodwork. The seats would be wood and leather.

The 20 by 60 foot stage would have a 36 foot proscenium and dressing rooms beneath.

There were to be three aisles and six fire exits. The Simplex projectors were housed in a fireproof booth.

Campbell and Bingham constructed the theatre which was designed by David B. Dusenberry.

Opened in 1917 (not 1916), according to trade news clipping displayed here

Uploaded a photo of a September 1920 announcement in Paramount Week indicating that the Palace would be a participant in a special exhibiting event.