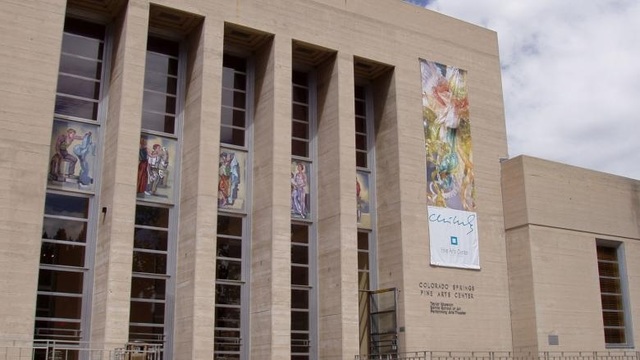 With $600,000, Alice Bemis Taylor funded the 1936 construction of the Colorado Springs Fine Arts Center and provided a $400,000 donation for an endowment. It was built on property owned by the Broadmoor Art Academy. Constructed during the Great Depression, Taylor saw the project as a means of employment for unemployed laborers. Taylor donated her extensive Indian and Hispanic art and her collection of 6,000 volumes of Americana. She envisioned a place that would be accessible to all people, with no admission charge.The Broadmoor Art School previously stood on the grounds of the current art center, on land donated by Julie Penrose. Elizabeth Sage Hare also collaborated with Taylor and Penrose on the building which became a center for a museum, art school and performing arts venue for the growing city.

At the original Grand Opening in April 1936, Martha Graham performed Lamentation-Dance of Sorrow;“art icon Alexander Calder executed the stage design for an operetta; and Frank Lloyd Wright lectured on the new building.” Art luminaries Boardman Robinson and Robert Motherwell were early teachers at the art school.

The booth still contained and employed 2 carbon arc 35mm projectors and 16mm projector until roughly 2005 when they were removed and replaced with (non DCP) digital projection equipment. I have been told that the projectors were Simplex and are now in Germany.