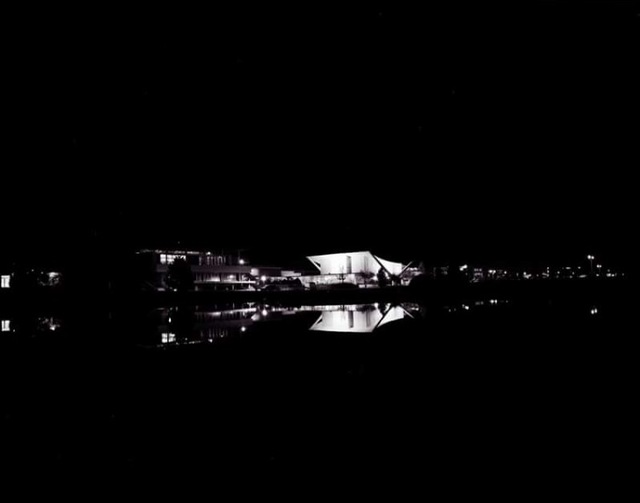 Constructed in 1962 as part of the Lory Student Center at Colorado State University. While it is attached to the student center, it is an entirely separate wing. It housed a 1927 Wurlitzer theatre organ that was installed in 1983 as a gift from Marian Cook in memory of her husband, John Brown Cook. In recent years, the booth contained a Century 35mm projector with platters and pedestal mounted EIKI 16mm machine. There was also a (non DCP) digital projector mounted under the balcony.

This was not your typical lecture hall that doubles as a theatre. It was a true, purpose-built, luxury theatre that immaculately showcased every motion picture, concert or play that it hosted.

There was a renovation of the theatre completed in 1999 that was tastefully done and mosty just updated the space while leaving all aspects of the original integrity intact.

In 2011, it underwent a second “renovation” that lasted one year and cost $6,000,000. The grand reopening in 2012 revealed one of the most tragic things I’ve seen; the theatre was entirely gutted and not one single vestige of it remained. The sloped floor has been leveled, balcony demolished and replaced with a wrap-around catwalk that can be used for seating, technical and projection booths gone and not replaced, organ removed and placed in perminant storage out of town, stage removed. The list is endless. It’s basically just a huge, empty space that is set up to accommodate whatever given event is taking place. There is no longer even any fixed seating or a perminant stage. Motion pictures are still shown on rare occasion however with no in-house projection equipment, it is through portable (non DCP) digital equipment. 6 years ago, the venue could best be described as a high end, mid-century modern theatre. Today, it would remind one of a cross between a low-end nightclub and a gymnasium.

Much as a might not approve of or like it, I have learned to accept our changing world without letting it get to me. The Lory Student Center Theatre is a huge exception to this however as I can hardly even think about it without becoming deeply hurt and upset. I am a passionate theatre historian as well as an individual who had lots of amazing times as a teenager in the theatre both as a projectionist as well as an audience member attending shows with my friends; remembering the gigs worked and events attended can always put a smile on my face.

While this was a huge loss for us all, it’s a double-whammy for me.