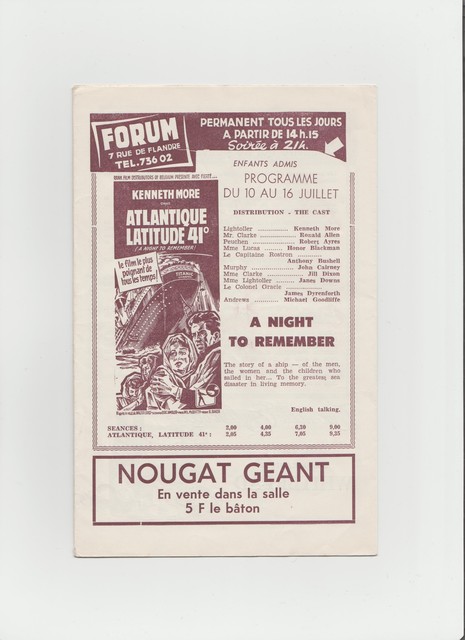 Opened on 19th April 1924 with “Merry Go Round” (Chevaux de Bois") and “Gaumont News”. Located in Vlanderenstraat near the Langestraat the commercial center of Ostend. The Forum Cinema had 999 seats in orchestra and two balconies. It had a full orchestra during the silent period, there was also dance hall named Calles Femina. On 13th July 1934 the dance hall was converted into a newsreel cinema, known as Studiac and it had 167 seats. The conversion was carried out to the plans of architect Andre Daniels, who had designed the Forum Cinema. The Forum Cinema was the well known cinema of the city together with the Rialto Cinema and was part of the Rialto group.

In 1946 the front of the cinema was given a Streamline Moderne style makeover to the plans of architects Boutelier & Vanbeginne. It was equipped with CinemaScope in 1954, showing its first film in that process “How to Mary a Millionaire” on 4th June 1954. The Forum Cinema closed on 10th May, 1985 when the Rialto Cinema became a 5-screens multiplex. The Rialto Cinema finally closed in 2012 at the arrival of Kinepolis multiplex in Ostend. The Forum Cinema became an amusement arcade named Lunapark. It then went to retail use and in 2016 it is Casa store. The auditorium survives above false ceilings.