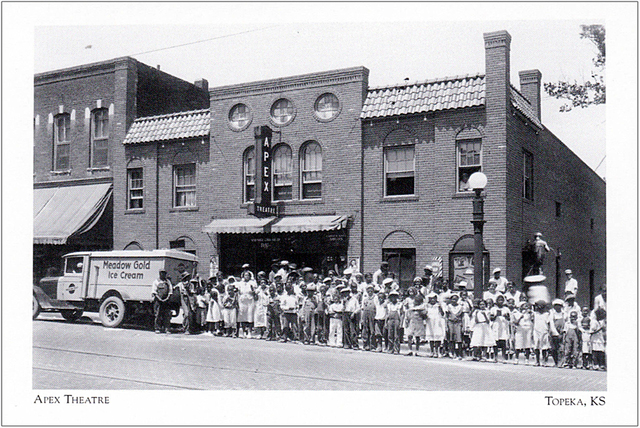 Around 1928/1929 a new Apex Theatre opened at 122 SE 4th Street with 550 seats. Like its predecessor it was an African American theatre. A grand two story stand alone brick theater building. Three round windows at top center above three cathedral windows. A vertical blade sign centered in front of these windows with a canopy below covering the entrance. Additional windows on each side of the second story with four cathedral type brickwork inlays to accommodate theater posters on the street level.

In 1940 it was renamed Ritz Theatre still operating as an African American theatre until at least 1955.

I’ve found quite a few references to the Apex Theatre, dating as far back as its opening on December 27, 1912, but the sources all give the address as 302 Kansas Avenue. It must have had two different locations, but the second one, on Fourth Street, must have opened sometime between 1928 and 1933, when the photo currently displayed above was taken.

This entry from the 1928 Topeka Colored Directory tells of Mr B. F. Payne, operator of the Apex:

“Apex Theater, 302 Kansas Avenue, has now been in operation for 15 years, and was formerly owned by the late H. E. Sheppard. Mr. B. F. Payne, the present owner, bought over the theater November 1st, 1927. To this date this is the only theater owned and operated by a colored man in the state of Kansas. Mr. Payne has done considerable improving to the equipment, etc., and is hoping that in the near future should business justify, to remodel and expand. He books the very best pictures obtainable for his many customers without any advancement in the price of admission. The theater goers of Topeka should be proud of this enterprise as there is no other Topeka theater that colored people can go to without being segregated. The pictures shown by Mr. Payne are the same as shown by other high class theaters and some are first run, meaning the first picture to be shown in Topeka. Mr. Payne gives employment to 5 the year round and two temporarily and books a Topeka orchestra regularly. Mr. Payne is an accomplished business man, a Spanish-American veteran, a member of the Masonic and all the auxiliaries and is strictly a Topeka product, having been born here.”

The original Apex was also mentioned in an article about Topeka in the June 27, 1914, issue of The African-American newspaper The Freeman, which said: “The Apex Theatre, on the main street, in the very heart of the business district, is a pretty and finely appointed Negro enterprise which Mrs. Wright manages.”

A strange thing in this picture, my friend Stephen has one of his fathers pictures of a Meadow Gold Ice Cream truck in font of the Granada Theatre in St. Louis. Meadow Gold must have been a Midwest Dairy.