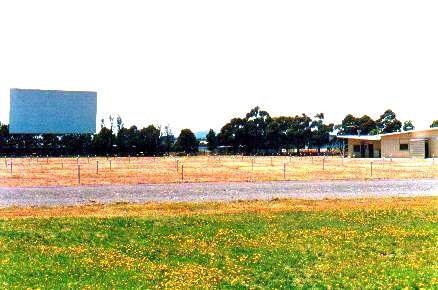 Located in the Delacombe district, to the southwest of Ballarat. The Village Drive-In opened on 23rd December 1961. It was closed on 9th June 1991 wit Kevin Costner in “Robin Hood: Prince of Thieves”. The site has been cleared and is now a housing estate.

Opened on 23/12/1961 and closed on 9/6/1991 with “Home Alone” and “Sleeping with the enemy” and “Edward Scissorhands” and Robin Hood(Kevin Costner version)“. The projectors were sold to tne Palais Theatre in St Kilda.

The screen was only finished being erected 5 minutes before the opening night of the drive-in theatre. Later called Village Southern Drive-in after Hoyts sold the drive-in to Village. There is a road running though the former drive-in site called Southern Court.

The snack bar(and bio box?) building might still be there behind a house, along with the entrance(or exit road?) and fences(and gate?) and(ramps(graded out?)?) and some trees around the sides.

The listed address of this one is actually Cnr. Tait St. and Smyths Rd. Delecombe.

The Robin Hood movie on the last night of operation was called “Robin Hood Prince of thieves”.