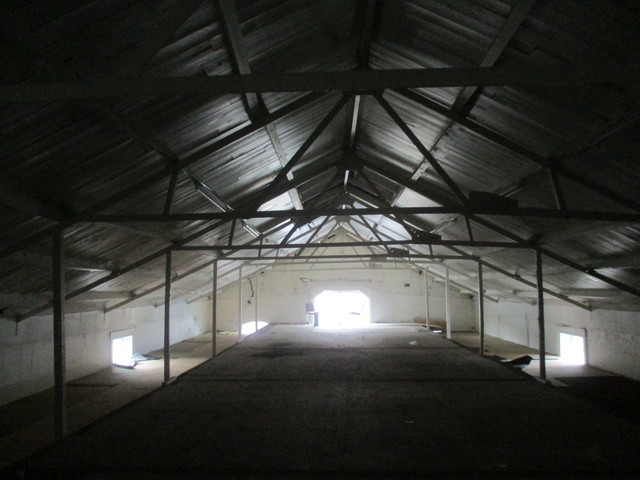 Located on The Square at the corner of Wolfe Tone Lane, Bantry, County Cork. The 500-seat Stella Cinema was opened on 26th April 1927. It presented pictures & variety and had one dressing room. By 1938 late-night dances ‘til 3am were also being held in the building. It was equipped with a Western Electric(WE) sound system. On 15th July 1942 it was destroyed by fire. It was rebuilt, continuing for many years. It was renovated and reopened on 25th July 1980 with 205-seats. It was closed around 1990.

When I visited Bantry, in August 2017, the former Stella was up for sale, with only part of the front being used by the administration staff of the Bantry Show. They kindly allowed me to look around, but there was no trace of the building’s former life as a cinema or other place of entertainment.

I then visited the town’s museum, where the lady manning the front desk, a life-long resident, told me the Stella was built in 1920. Long-time projectionist Fred Burkett had a photography shop in the town. The 1940 Kine Year Book (KYB) lists the proprietor as W. McSweeney, with films booked at Tralee (and seating for 400); the lady had said it was owned by Mrs McSweeney, of Tralee. The 1953 KYB lists the proprietor as A. McSweeney, possibly W. McSweeney’s widow. (The 1953 KYB lists seating for 600, a 7ft wide proscenium and a 15ft deep stage.) Later, the Stella was owned by Rex Murphy, and managed by his son Gerard. Sadly, Gerard died in a boating accident in 1985. The Stella apparently continued for a few more years, but closed in the late 1980s. (Please note: This history is based on the lady’s recollections, having been put ‘on the spot’ when I suddenly turned up, and details I later discovered in the KYBs. So I would welcome any clarification or further information that other contributors can provide!)

From ‘Irish Cinemas’ by Jim Keenan - with permission: Founded by John M Murphy, the Stella Cinema opened on 26 April 1927. It seated about 500 and the first film shown there was The Midshipman, Under the heading ‘A rat goes to the pictures’, the Irish Press reported on 27 October 1955 that “Women screamed in Bantry’s Stella Cinema when a rat got into the parterre during a showing of Sabrina Fair.” Early on the morning of 15 July 1942, a serious fire occurred at the cinema, which completely destroyed it, leaving only the outer walls standing. It was rebuilt but by the late 1970s the cinema had deteriorated badly and the roof leaked. It closed for a major renovation and opened again on 25 July 1980 with The Empire Strikes Back The newly-refurbished cinema seated 203 (124 in the stalls and 79 in the balcony). It continued to operate throughout the 1980s but was put up for sale in 1990. In recent years the building was used as a furniture store then offices for the Bantry Show. it had no connection to the Stella in Rathmines in Dublin.